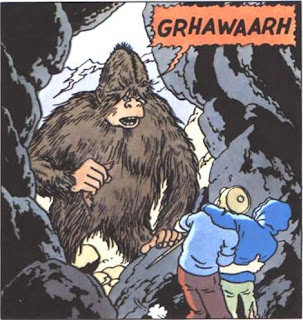 I was "flipping around" the other day and landed on a program about UFOs. Now, I don't want you to get the wrong idea. I am not that interested in UFOs. But they seem to be on television all the time, or maybe I am just noticing them more often now that somehow they have become a "blog" preoccupation, like velvet suits. (I should mention that I just saw the comedian Katt Williams on TV in a bright green velvet jacket, I believe.) I blame McNeil. In any case, this UFO show flashed an image of a UFO book by Ivan T. Sanderson. I was surprised! I recognized the name. You know how I love cheap books. I once picked up a 1937 first edition of Ivan T. Sanderson's ANIMAL TREASURE for fifty cents at a library book sale. It's a pretty straightforward travel/naturalist book for the general reader, though chock-full of the kind of sentences I enjoy: "These were giant millepedes, larger than Frankfurt sausages. They are harmless, timid, and friendly animals, filled mostly with air and completely devoid of any sense." (And on the next page he meets some pangolins!) So I did not associate Ivan T. Sanderson with UFOs. Hence my surprise. But it did stir a memory which turned out to be correct. I thought I had seen Mr. Sanderson's name in a McSweeney's article about the yeti. (One issue of McSweeney's contained a magazine-within-a-magazine called YETI RESEARCHER [the only book ever to be stolen from my home! But that's another "post"], in which Mr. Sanderson is given credit as "the first to propose a classification system" for "cryptic hominids.") Once you make the leap from pangolins and millepedes to yetis, I suppose it is only one more short hop to UFOs. But none of this is what I meant to say. When I did some "Googling" on Mr. Sanderson, I found a review of ANIMAL TREASURE on the "web" site of the obscene behemoth, that corporation I will never name (where I am STILL designated as a "YA writer" despite PW's kind correction). If there is anything I enjoy about the behemoth, it is distilled in the time the person reviewed a pair of socks. I also appreciated the boisterous "customer review" of Sanderson, which I present now for your pleasure, with its flights of enchanting - indeed, rapturous - misspelling and "questionable" grammar intact. I believe they express enthusiasm in a way that a more proper and restrained reflection never could, and in fact I feel a certain kinship with the kid who wrote the review. Sometimes I try to write this way "in character" but it just goes to show you that nothing beats the real thing: "this was a really great book, I read it like 10 times. I read it so many times it fell in about 5 peices even if you dont like animals a lot its very iteresting and witty and tell's about a lot of strange animals. its also funny, Ivan T sanderson is a very funny writer. I totaly recomend this book !!! P.S this book was wrote like 100 years ago and tells about a english dude going to africa to collect rare animal specimens. on his journey he runs into giant bat's, loud lizards,and cool snakes, and to make it better its all a true story !"
Posted by Jack Pendarvis at 5:07 AM