Just before an ADVENTURE TIME meeting the other day I was conversing with my twitter friend Brian about a talk show Jerry Lewis had in the 80s, cashing in on his role from THE KING OF COMEDY. He told Suzanne Somers (pictured) she had "pizzazz," or so I remembered. 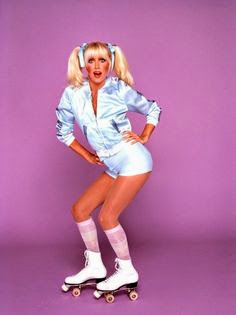 I thought Kent Osborne's brother Mark had introduced that clip to me on a privately circulated VHS tape of oddities, but Kent didn't remember that. During the meeting he found Jerry's talk show on youtube and watched it and started cringing. Meanwhile, although (because?) from my end of the video conference I could only hear the audio and see the reactive cringing, I was cringing FOR Kent, or for Jerry, I couldn't tell which, they were inseparable. And I had an epiphany. All of my epiphanies are about Jerry Lewis. Yes, as I've observed, Jerry anticipated Andy Kaufman, and now that I think about it, Jerry's first act, when he was little more than a kid, was lip-syncing to records, mirroring exactly the first performance by Andy Kaufman on the first episode of Saturday Night Live. (Tony Clifton = Buddy Love?) As J. Hoberman observed, Jerry "both depicts and manifests inadvertent disclosure." So he can razor in on the phoniness of show biz satirically while living without qualms the actual life of a show biz phony. That old Fitzgerald thing about the rare ability to hold two opposed ideas in your mind at the same time, blah blah blah. Or as Megan Abbott said in an interview I did with her, "the unconscious and conscious are always this close... I’m putting my fingers together very closely... just this close always and always brushing up against each other constantly. And so we often are thrown into ourselves in ways that are alarming and we often have to see things about ourselves because we can’t completely hide from the unconscious." Jerry's 80s talk show was not art (was it?) but it crystalizes what Manohla Dargis said about Jerry disturbing "all those nice people in all their fancy clothes." Meaning us! So why, for me, Jerry is more powerful an artist than, say, the comedy team (how they'd probably chafe at that old-fashioned term) Tim and Eric, or any other contemporary practitioner of "anti-comedy" (I guess we call it) is that Jerry is doing what they do, but HONESTLY and not ironically. At heart it's helpless and noble. That was the epiphany. 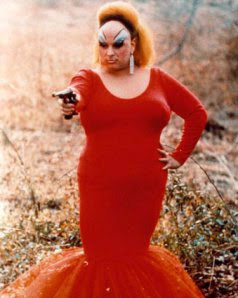 I watched a documentary about Divine, who on some basic level was as non-ironic as Jerry Lewis. For Jerry Lewis and Divine, show biz is a joyous religion in the service of a dark god, ha ha, how dramatic. Jerry Lewis is the father of Divine. There are minor similarities too: each, while young, created an overwhelming and brilliant persona that became a kind of consuming trap. Patterns of paternal fracture and rapprochement. I don't know. Maybe Jerry (who cross-dresses kind of touchingly - like late-period Divine - in THREE ON A COUCH) has a drag queen's instinct (lip-syncing!) for novelty, exaggeration, nostalgia, luxury, disguise and self-creation. And like Divine maybe he's suspicious of (guilty about?) revering some of those things and so turns them on their head. It occurs to me that Jerry has spent most of his life in a form of drag - like Pee Wee Herman! why can't I stop typing? - and maybe like Paul Reubens's some of Jerry's "bad" behavior can be attributed to the emotional violence required to break out of its strictures. Drag as freedom, drag as constraint. Can we call Suzanne Somers hunched over on roller skates a kind of enforced "drag"? Maybe I should think this out. But I don't think I shall. Somebody else on twitter was complaining that he can't watch Jerry because Jerry is "needy." All performers are needy. The glorious thing about Jerry and Divine is that they don't cover it up. They revel in it and they make us face it. Now we're all super smart and in on the big joke. Only when we watch them are our reactions are visceral and true.
Posted by Jack Pendarvis at 6:03 AM