It is my duty to inform you that Megan Abbott and I continue apace with what might seem, to an outside observer, our increasingly bizarre book club. For example, now we are reading the memoir of a playwright, all about the time he wrote a doomed (?) play for Mary Martin and Carol Channing. I bring it up because the author includes himself in a group of "eight serious-looking, owl-eyed men." As you know, I am compelled by unknown forces to make a note whenever I read a book with an owl in it. In my struggle to make the current iteration entertaining, I might mention that this is the first time an author has referred to himself as owl-eyed, in my experience. "Owl-eyed," from my understanding of the term, does not come across as a compliment. It is generally applied to other people. I have done no research by which to validate anything I have just said. I will add, just to put a cherry on top, that during his boyhood, the author was known by the unsettling nickname "the body finder," because he found five dead bodies. Those bodies, I believe, were found on five separate occasions, and by accident, as the author shoehorns into a parenthetical. Now, he does specify that he was a teenager when he kept finding bodies. I'm not great at math, but I think that means he found a body on average once every year and four months or so. I'll bet he started getting nervous every time the new year rolled around! We'll never know, because he mentions his body finding abilities so blithely that Megan missed it entirely until I brought it up.
Posted by Jack Pendarvis at 8:46 AM 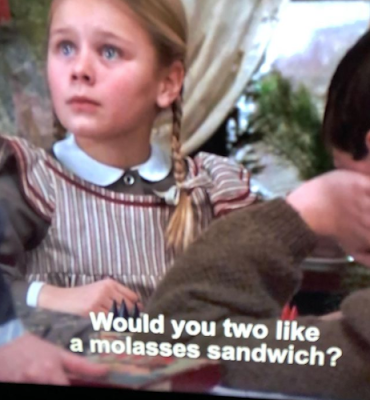 As you know, I have given up "blogging" entirely. However, something has occurred which requires immediate comment. You no doubt recall with a bittersweet admixture of reverence and nostalgia the time I noticed the importance of sandwiches to Bergman's SCENES FROM A MARRIAGE. Having recently rewatched the same director's FANNY AND ALEXANDER, I was stunned to discover that it features even more sandwiches than SCENES FROM A MARRIAGE. The exciting prospect of studying the entire Bergman oeuvre from the perspective of sandwiches presents itself. In FANNY AND ALEXANDER, an unusually lenient wife orders up "two cheese sandwiches" for herself and her happy, adulterous husband. Soon, the eponymous children are offered "a molasses sandwich," which the subtitles have in the singular. I will have to learn Swedish for a more complete examination. Moments later, for example, the children are asked to put down the "sandwiches," plural. One may imagine that half of a molasses sandwich is enough for any child. Perhaps the single molasses sandwich was divided in two, becoming, for all practical purposes, two sandwiches. While "half a sandwich" is a traditional unit of sandwich measurement, it is not difficult to picture two halves of the same sandwich, being consumed by two separate people, as "sandwiches." A mystery! I am put in mind of the J.J. Special, a favorite order from Manuel's Tavern in Atlanta. It was a patty melt of sorts, divided into four sections, each held together by a fancy toothpick. At some point, the J.J. Special was changed, and it came to the table cut in half, appallingly like any ordinary sandwich. It took a long time to get used to the new configuration. I should also mention that the J.J. Special might have been the name of the entire order (which came with onion rings AND fries), and not merely the name of the sandwich (see Dr. Frankenstein and his monster). We may further examine two sandwiches of unspecified ingredients in FANNY AND ALEXANDER. The cruel and austere bishop asks for "a sandwich and a glass of milk," while the happy adulterer is promised "a beer and a sandwich" to be served in bed by his indulgent wife. Can it be that a sandwich is the one food that pairs well with either milk or beer? I have put no thought into the question. But surely we may draw many conclusions from the beverage choices of these two very different characters. In conclusion, sandwiches for the happy adulterous Swedish man form somewhat of a framing device in FANNY AND ALEXANDER, as they appear near the beginning and near the end of the film. One might say, then, that the film itself is a sandwich.
Posted by Jack Pendarvis at 10:55 AM

I woke up late this morning and turned over and looked at a bookshelf near the bed. My eye was drawn to THE CANTOS of Ezra Pound. I lay there thinking, huh, I never read that, and I'm getting old, and I'll probably never read it. I guess that's what got me out of bed. I went over and picked up the book and looked at it, thinking some more about how I'm old and will never read it. "Well, let's see what you've got for me today," I said aloud, and opened to random page, and saw a line about "the bearded owl making catcalls." Now we're getting to the part of the story you're going to tell your children about one day. I thought, well, well, well, have I ever "blogged" about Ezra Pound? And it turned out I did so in 2013, having read the first four or five cantos, and predicting with 100% confidence that there was an owl in this book somewhere, and further predicting (less accurately) that I would never know, because (back to being accurate again) I would never finish reading the book.
Posted by Jack Pendarvis at 10:59 AM 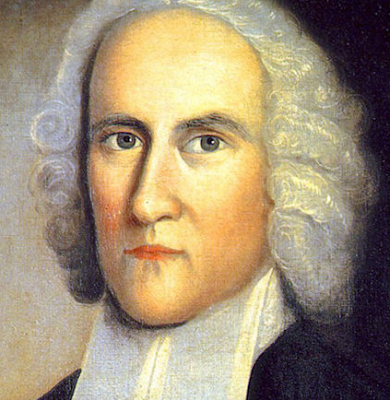 The 10 most thrilling excitements from 2021. 10. Square Books introduces a new bookmark. 9. Confirmation that Spanish moss is related to the pineapple. 8. A list of 24 dog names discovered in Ovid. 7. I read about a man whose hat popped off his head in fright. 6. Dr. Theresa and I have a good laugh about 18th-century preacher Jonathan Edwards (pictured). 5. Dr. Theresa and I share an appreciation of Vera Farmiga. 4. A Proustian chicken wing. 3. Wild turkeys by the side of the road. 2. I have chicken-and-oyster gumbo from a restaurant where I've been eating for over 50 years. 1. Kate Tsang constructs a double cheeseburger out of two single cheeseburgers. Thanks to everyone who worked together to make these amazing achievements a reality. See you next year!
Posted by Jack Pendarvis at 6:49 AM

I also enjoyed Levrero's defense of superstition: "Unlike with jealousy, which is another part of myself that I abhor, I respect and try to pay attention to my superstition when it makes itself known. Although I very much doubt that not doing so could offend some higher being, it seems obvious that it would offend some lower being, which lives inside me and with which I'm obliged to coexist."
Posted by Jack Pendarvis at 9:15 AM

I Couldn't Shut Up 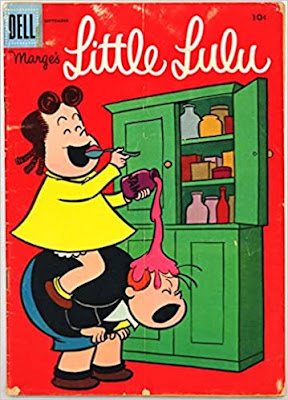 As you know, I stopped "blogging" many years ago. For a while there, I would read a book with an owl in it and add it to my list, and that was the final vestige of my "blogging." But then I started getting inspired by phrases all the time. For example, I read the following in THE LUMINOUS NOVEL by Mario Levrero: "It's worthwhile reaching boredom, the rock bottom of boredom, because that's where the right impulses begin." I would like to take this opportunity to add that the narrator - who is indistinguishable from the author - reads a bunch of Little Lulu comic books at one point. You remember back when I was "blogging"! I couldn't shut up about Little Lulu, could I?
Posted by Jack Pendarvis at 2:32 PM