Bill's on a Roll

William Boyle - known around here as Bill - has a new book coming out in November. It's called SHOOT THE MOONLIGHT OUT, and I'm reading it right now. It's great! I am sure you will all recall with fondness the Owl's Head Wastewater Treatment Plant from Bill's first novel GRAVESEND. I am happy to say that SHOOT THE MOONLIGHT OUT features Owl's Head Park, meaning that it, too, goes straight onto my list of books with owls in them. Furthermore, SHOOT THE MOONLIGHT OUT contains a detailed allusion to Jerry Lewis, giving it all the ingredients of a perfect novel. I truly thought Bill's previous book, CITY OF MARGINS, was his absolute masterpiece, but SHOOT THE MOONLIGHT OUT seems primed to equal or surpass it. Bill's on a roll!
Posted by Jack Pendarvis at 4:24 PM 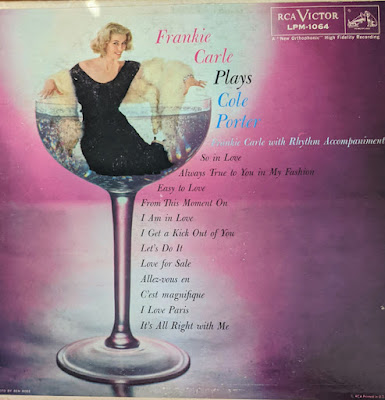 I came here to tell you one thing, but two other things intervened, so now I have to tell you three things. I will save the thing I originally wanted to tell you for last. I don't know why. First, here are the other two things. 1. Last night Dr. Theresa and I watched another mediocre movie, this one about the devil. To compensate for its mediocrity, it starred Vera Farmiga. "I know I always say this, but I think she's really pretty," said Dr. Theresa, to which I replied, "I know I always say THIS, but I saw her in my hotel lobby in Burbank once. She was wearing a hat!" Then we chuckled knowingly, for what is marriage but saying things to one another that you know you've said before, and enjoying it? Well! We are not even to the first thing I am going to tell you yet. Later in the movie, some other dude came along, some old dude, I was like, "Who is this old dude? He looks familiar." Dr. Theresa was like, "He was in some TV show? I can't remember." So we sat there a while and I suddenly remembered: "Oh yeah! He played a mad scientist on a TV show called FRINGE. And once, on an entirely different trip, I saw HIM in the lobby of that SAME HOTEL!" As you can imagine, the coincidence made at least one of us giddy with excitement. 2. Saw a tiny bit of BLUE HAWAII this morning. You may be asking yourself (you aren't), "Why are you watching so many Elvis movies lately?" Why, he is nothing less than the "star of the month" on TCM. Anyhow, for Elvis's first onscreen number, as he zooms toward the beach with his girlfriend in a convertible sports car, he sings a swingin' version of the old French (Canadian?) ditty "Alouette." What? They couldn't come up with an original melody for the first number in BLUE HAWAII? So they do a nursery song? (See also, the time he was forced to sing "Old MacDonald Had a Farm" in a movie.) But that's not what I wanted to tell you either! What I wanted to tell you is that the wikipedia article on "Alouette" somehow skips over this usage entirely (as of this writing), meaning that I know something wikipedia doesn't know. It makes me feel like a god! I would fix it (would I?) but I don't know how. To be fair, the lyrics bear no relation to "Alouette," relying thematically, rather, on Cole Porter's "Always True to You in my Fashion," although (as perhaps goes without saying) employing none of the wit. 3. Finally! All I meant to do is quote a letter from Katherine Anne Porter to Tennessee Williams: "I am a realist in that sense that everything is real to me, nightmares, daydreams, the world visible and invisible."
Posted by Jack Pendarvis at 9:41 AM

A Thing I Noticed

It was exactly one week ago today that I viewed the Elvis movie G.I. BLUES, and I noticed something about it that reminded me of other things I had noticed about other things. And if there is one thing you know about me, it is that when I notice something that reminds me of something else I previously noticed, I have to tell you about it. And by "you," I mean nobody. But then some things happened that are none of your beeswax, and I didn't get a chance to reflect upon the matter further... UNTIL NOW! I am sure you will recall how I told you that in the Clint Eastwood vehicle EVERY WHICH WAY BUT LOOSE, they play a diegetic song, the chorus of which mentions Clint Eastwood (the actor, not the character he portrays in the film). More aligned with our current subject (as you shall soon see for yourself!) is DESPERATELY SEEKING SUSAN, in which the eponymous Susan, portrayed by Madonna, listens to a Madonna song on a jukebox! So! In G.I. BLUES, Elvis Presley, playing a guy named Tulsa, sings a little ditty in a nightclub. Well! One guy doesn't seem to like it so much, and decides to disrupt the proceedings by playing something rowdy on a convenient jukebox. As a closeup of the label confirms, he chooses "Blue Suede Shoes," as performed by one Elvis Presley. A donnybrook ensues! Yes, you are reading this correctly: the performance by Tulsa (Elvis Presley) is ruined by a recording of Elvis Presley. In fact, we may speculate that the much-derided "movie Elvis" is successfully attacked and devoured by "primal Elvis." Ha ha! I hate myself. (See also.)
Posted by Jack Pendarvis at 8:28 AM 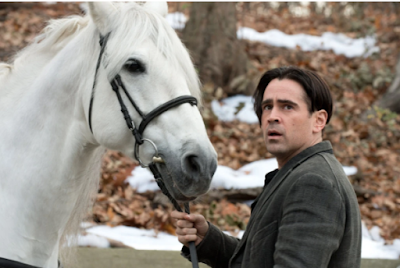 A long time ago, probably in a meeting for ADVENTURE TIME: DISTANT LANDS, Adam mentioned the movie WINTER'S TALE (not to be confused with the Shakespeare play with a very similar title)... I believe that all Adam said by way of assessment was (and this may not be an exact quotation) "It's a weird movie." I couldn't tell if he meant it in a good way, a bad way, or was just stating a fact. But that movie has been in the back of my head for some time. I believe I remarked to Adam that my friend Caroline was wild about the novel upon which the movie was based. I seem to recall that she read it more than once. Again, the facts may not back me up on that. It's just what I have sitting here in my brain. So I watched a little bit of it last night. For reasons unknown, I was like, "It's time!" I got distracted for about two seconds and I looked up and Colin Farrell had made friends with a magic horse? I was like... "What did I miss?" But the main thing I wanted to say is that Russell Crowe goes to a restaurant and orders a pan-fried owl. Now, I can't add WINTER'S TALE to my long list of books with owls in them, because I don't know whether anyone orders an owl for dinner in the book or if it was just a whimsy of the screenwriter. Let me emphasize that the restaurant in the movie did not serve owl, which fact led Russell Crowe to murder the waiter, as one does. So, it's a universe where you can make friends with a magic horse, but you can't go to a restaurant for a nice plate of owl. Such reflections reminded me of the books I have read in which owls are eaten by people... COMING INTO THE COUNTRY by John McPhee and THE WOMAN WARRIOR by Maxine Hong Kingston. I reflected, further, on the use of owl eggs as folk medicine, as reported by Burton in his ANATOMY OF MELANCHOLY... a practice which apparently spread to the new world ("click" for details), if it wasn't here already. Maybe I've read other books in which owls or owl eggs are consumed, but I can't remember them right now (see the subject of my failing mind, above), and the whole subject appalls me, frankly. I'm sorry I brought it up. This is why I don't "blog" anymore. PS Here is a sobering postcript indeed. As I was meaninglessly searching for the hyperlinks with which to festoon this surely unread "post," a passing mention led me to recall that my second book, YOUR BODY IS CHANGING, features a political banquet at which owl is served. Weirdly, I was trying to remember the title of that particular short story last night (I still can't remember it), for what I believed were unrelated reasons. I guess my brain was trying to tell me something. Nice try, brain!
Posted by Jack Pendarvis at 8:36 AM

I was just thinking about how on July 4, 2011, I was reading a book about werewolves and how, four years later, on July 3, I was reading about werewolves in another book, and furthermore I was thinking about how, this year, on July 2, Dr. Theresa and I coincidentally watched a mediocre werewolf movie. But that's not why I sat down to type. I wanted to show you a sentence from that book about Wagner by Alex Ross: "Holitscher left a rueful description of how on one occasion, after a convivial visit to Mann's home, he turned around to see his colleague at the window, studying him through opera glasses." That sentence has everything! You could make a movie out of it.
Posted by Jack Pendarvis at 7:16 AM