Just What He Had In Mind 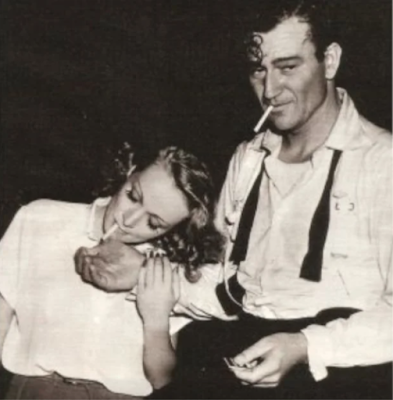 "Only connect," said E.M. Forster, and this is just the kind of thing he had in mind: I've been dipping into that book about the CIA, and yesterday the author included, for no real reason at all, the details of one specific sexual encounter between John Wayne and Marlene Dietrich, which was also featured, more understandably, in a biography of John Wayne I read some years ago. Anyway, it was weird. Not the encounter, just its recurrence, verging on non sequitur, in a book about the CIA.
Posted by Jack Pendarvis at 5:12 AM

So, I just saw this New York Times headline: "This 105-Year-Old Beat Covid. She Credits Gin-Soaked Raisins." I haven't read the article, because who needs to read the article when you have a headline like that? I would, however, like to point out that McNeil was telling us about the curative powers of gin-soaked raisins on this "blog" well over a decade ago ("click" here).
Posted by Jack Pendarvis at 7:39 AM

The Man Who Sold His Face 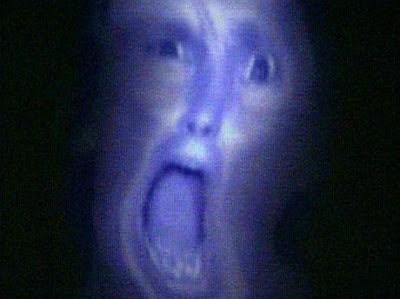 Dr. Theresa and I have been rewatching THE X-FILES and I have but one thought. Who is this guy (pictured) in the opening credits? He is presumably intended to represent a victim of a paranormal phenomenon such as is investigated by the protagonists of THE X-FILES. His face gets all stretched out and he looks as if he might be saying "AAAAHOOOOOOOOHAHAAAAAAAAAAAAAOOOOOHHHHHH!" or making some similar wordless protestation. And I always wonder, does he get a tenth of a penny or something every time somebody watches THE X-FILES? Or did he sell his face to THE X-FILES for a lump sum? The answer, I suspect, could be easily found if I spent about three minutes on the "internet," but I just don't think I have the energy.
Posted by Jack Pendarvis at 4:48 PM 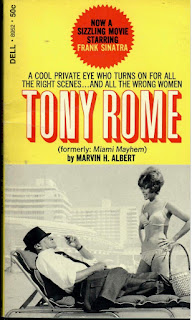 Here's something you won't care about! It all started when I saw a little bit of the Frank Sinatra movie TONY ROME on TV. I noted that Nancy Sinatra (Frank's daughter, of course) sang the theme song, in which mothers are advised to "lock your daughters in" because "Tony Rome is out and about." And she IS the daughter (as previously stated) of the person of whom she is singing... himself a danger to daughters! Of whom she is one! Of his! The second thing I noticed as the movie began is that Tony Rome lived on his boat in Florida, just like Travis McGee. Given these two facts (were there two facts?) I struck up a conversation with Ace Atkins on the subject. Was Tony Rome a big Travis McGee rip-off? Such was the question that came to my mind. Ace said I should read the paperback of the first Tony Rome novel as homework and tell him. So he found a copy on the "internet" (the edition pictured above), purchased it, and dropped it contact-free (given our troubled times) on our front porch, where it sat for over 24 hours before I realized it was there. About two pages in, I made a startling discovery. Now! We're getting to the part you really won't care about, which I believe I put most succinctly in an email to my friend McNeil: "Travis McGee's boat is named The Busted Flush because he won it in a poker game with a busted flush. Tony Rome's boat is named The Straight Pass because he won it in a dice game with six straight passes in a row." Now, I naturally googled "tony rome" + "travis mcgee" + "busted flush" + "straight pass," which combo netted just seven results, some of which were duplicate texts, leading me to conclude that only three people, maximum, in the history of the world, have ever expressed proper outrage over the matter. [They didn't express outrage. - ed.] All right, are you ready for the kicker? Then Ace dropped the bombshell on me that the first Tony Rome novel appeared FOUR YEARS BEFORE the first Travis McGee novel. It is Travis McGee who is the rip-off! If a rip-off exists. Which I believe I have proven conclusively it most certainly does. Hello? Is anyone there?
Posted by Jack Pendarvis at 8:09 AM

One of the things I've been doing during the pandemic is finally reading a nonfiction book about the CIA that Lee Durkee loaned me, oh, five or six years ago. Yesterday I came across a quotation that fascinated me. "'The general was in fine form this morning, wasn't he? Ha, ha, ha!' Dulles would chuckle." Was Dulles laughing? Or was he speaking the word "ha" three times in succession? The dialogue tag "Dulles would chuckle" seems to indicate actual laughter... or at least chuckling. But encasing the "Ha, ha, ha!" in quotation marks, and carefully separating them by commas, as if indicating their individual distinction... hmm. It seemed to me (and a check of the endnotes proved me right) that this "Ha, ha, ha!" business was lifted from a secondary source. So another author had originally recorded Allen Dulles going around saying, "The general was in fine form this morning, wasn't he? Ha, ha, ha!" Then, I suppose, the author of the current volume, the one I am reading, had to make a decision. But if he really thought that Dulles was chuckling, why didn't he write "'The general was in fine form this morning, wasn't he?' Dulles would say with a chuckle"? That would not have violated the original author's "Ha, ha, ha!" (which, honestly, when standing alone like that, looks - thanks, in part, to the exclamation point - much more like forceful barking than a chuckle). Maybe he was hedging his bets. All right, I am done with this subject. I mean, I have other thoughts about the typographical representation of laughter as it has stylistically evolved, and what part that plays in my perception of the... eh... but... forget it. [Postscript, added after some hours of brooding consideration: I neglected to touch on the "would," that is, the fact, as reported, that Dulles "would" chuckle, implying numerous instances of the general being in "fine form," and so, perhaps, the accompanying chuckle became habitual, insincere, formal, rote, in which case, spelling it out as "Ha, ha, ha!" seems perfectly reasonable.]
Posted by Jack Pendarvis at 6:55 AM

You've probably been on pins and needles! Is that an expression? Anyway, in August I told you I was "blurbing" a book with an owl in it, but I couldn't tell you the name because I wasn't sure it had been announced. Now, thanks to the twitter account of Bill Boyle, I see that the forthcoming publication of the book has been announced, and it is a novel called IVORY SHOALS ("click" here to preorder), written by John Brandon. I hope you feel as relieved as I do!
Posted by Jack Pendarvis at 6:49 AM