So we were watching Alfred Hitchcock's SABOTEUR today, and I noted that Robert Cummings held a match under a sprinkler to set off an alarm so he could escape from a building. Now, there is an entire section of my cigarette lighter book about just that plot device, and whether or not it would truly work. I very much regret not including the example from SABOTEUR in my cigarette lighter book, as it is doubtlessly one of the earliest on record. Is it? I have no idea. The funny part (?) is that no explanation is offered. The filmmakers appear to believe that the audience will get what Robert Cummings is up to right away. If so, to what great, collective precedent was the mind expected to leap? To find out more would require research, an activity to which I am entirely disinclined, seeing as how the book came out so very long ago. Now! I feel we should talk about something else besides my lamentable cigarette lighter book. I owe you that much! So. Before we watched the movie, we heated up some leftovers, and I fetched a container of sour cream with which to gently daub them. I may have sung a little song about it. "Sour cream/ It's everybody's dream." The song may have gone something like that. Well, Dr. Theresa and I have been married for 25 years now, so I could tell right away that maybe she wasn't too crazy about me standing around singing the praises of sour cream in a loud, dramatic baritone. What do you want from her? We've been in lockdown since March! So! Then we watched the movie. At one point, Robert Cummings stumbles into the home of a benevolent stranger, who proclaims that he dabbles in musical composition. As if to prove his point, the guy sits down at the piano and tickles the ivories. So I started singing, pretending to be the guy, "Sour cream! Sour cream!" Anyway, it got a laugh. Wouldn't that have been something? If he had begun singing about sour cream? It certainly was a jolly time. In another part of the movie there's this baby that's like two years old, and it keeps throwing a ball to people. I was like, wow, this little baby is throwing the ball with more accuracy than I would display, were I to attempt the same. Then I thought up funny stories to myself about Alfred Hitchcock training this baby to throw a ball like that... perhaps with the aid of a string tied to its arm! That would be horrible, of course, but it was all a part of my wonderful imagination that makes every day a joy.
Posted by Jack Pendarvis at 2:12 PM

Last night I was watching NONE BUT THE LONELY HEART and Cary Grant and Barry Fitzgerald went to a bar. Cary Grant started playing the piano while Barry Fitzgerald sat at a two-top, placing stray bits of loose tobacco into a sort of little funnel on a machine, which seemed to be an amenity of the establishment. From the bottom of the machine protruded what appeared to be a freshly rolled cigarette. "Hmm," I thought to myself. "I recall writing a book about cigarette lighters, and in one part I discuss the personal cigarette-rolling machines of the early twentieth century, as opposed to the industrial cigarette-rolling machine, first perfected in 1880 by James Bonsack, which I also discuss. Honestly, I had no idea what I was talking about. Yet I can't help but wonder with my curious mind whether Barry Fitzgerald is using one of the former in this scene!" Well, friends, I hopped on the old computer and did some research. Yes, I did some research for about an hour, getting nowhere, and then I remembered, hey, your stupid book came out four years ago, who cares?
Posted by Jack Pendarvis at 7:23 AM

Chicken in the Air 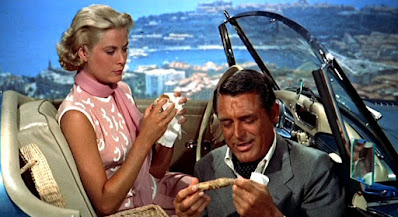 I was watching TO CATCH A THIEF, and there were Cary Grant and Grace Kelly eating chicken and drinking beer. Naturally, I was like, I must email Kent right away! Kent loves eating chicken and drinking beer! I entitled the resulting email "Chicken and Beer," which reminded me that Kent had eaten in the Atlanta airport once, having stumbled upon his ideal restaurant there, a restaurant delightfully named "Chicken and Beer." I did not report on the matter at the time because I had given up "blogging" forever. Kent emailed back that he had recently fried chicken for himself for the first time, with pleasant results. Now, for the record, I must say that Grace Kelly appears to be eating a sandwich, not chicken. Maybe it is a chicken sandwich! We can only hope. I can't recall if the type of sandwich was specified. Cary Grant really appears to go to town on his chicken, but when he is done, and tosses the remains into the picnic basket, I can't say that it looks as if he has really had much chicken at all. In fact, I was appalled at the amount of chicken he appeared to be wasting! Then he starts smooching it up with Grace Kelly, and kind of leans her backwards over the open picnic basket, and I could only imagine that her hair was getting on the chicken. Perhaps I was focusing on the wrong thing. In conclusion, I happened to be emailing my friend Megan about TO CATCH A THIEF and, in response, she brought up, independently, of all scenes, not knowing of my recent correspondence on the matter, the chicken scene! Chicken is in the air. And in the hair!
Posted by Jack Pendarvis at 7:36 AM

As I humorously tweeted earlier today, "Watching a Doris Day movie last night, there was a song lyric 'see the clown falling down, it's the best show in town' and I thought what town is this? They need more options in this town!" Now, if I'm going to be honest, it's clear from context that the singers are referring to the whole circus, not just the clown falling down, when they claim "it's the best show in town." Still, the lyric, which is by no less a genius than Lorenz Hart, if the credits are to be believed, lends itself to humorous misinterpretation, and so I stand by my tweet. On the other hand, the song is performed during a parade that has, like, a dozen snow-white horses outfitted with Pegasus wings, and (unrelated to the horses) the most convincing ape makeup and pantomime I have seen outside of Kubrick's 2001. Also, they have a caged Martha Raye in a bright red lion costume. Now, leaving aside the fact that the plot centers around a rundown circus that is about to go broke - in which case, maybe cut back on the elaborate horse costumes - I have to admit this "show" looks pretty great, maybe it is the best show in town, what the hell do I know?
Posted by Jack Pendarvis at 7:25 AM

Speaking of commercials, I just saw a dog food commercial where a guy says, with apparent sincerity, "I didn't piece it together that dogs eat food." Nothing in the ad suggests that it is ironic or cute. He is supposed to be a regular fella like you and me who doesn't get how dogs work.
Posted by Jack Pendarvis at 9:16 AM