I was watching JULIUS CAESAR but then I went to bed. I turned off the TV just after Casca said, in a line to which I guess I had never paid heed before, that "if Caesar had stabbed their mothers" his supporters would still love him. It reminded me of the time Donald Trump boasted he could stand in the middle of Fifth Avenue and shoot somebody and his supporters wouldn't care. Maybe that's why I turned off the TV. Later, I couldn't sleep. I became restless and got up and watched more Julius Caesar. I am sorry to say that when I first started watching, I simultaneously checked my twitter feed and then my email. So, I had receieved an email from Jimmy, who coincidentally mentioned James Mason... while James Mason was on my TV screen! Also, Elizabeth Ito had tweeted about seeing a barn owl standing by the highway in the broad daylight, and wondering what it meant, which tweet I read AT THE EXACT SAME MOMENT that Casca was wondering aloud what it meant that an owl was sitting in the marketplace in the broad daylight! Two James Masons! Two daylight owls of portent! With that, I put away my phone. I was like, "Okay, you've got my attention, Shakespeare!"
Posted by Jack Pendarvis at 7:12 AM

Dipped into WAGNERISM by Alex Ross again. I arrived at this promising sentence: "It was the age of esotericism, occultism, Satanism, Spiritism, Theosophy, Swedenborgism, Mesmerism, Martinism, and Kabbalism." It was at the beginning of a section! When a section starts like that, you just buckle up for a roller coaster ride.
Posted by Jack Pendarvis at 6:27 AM

I wrote a book about cigarette lighters and then I forgot about it. For a while, though, after it was too late, I would come across this or that detail that I knew in my heart I should have included in my cigarette lighter book, and that my cigarette lighter book, truth be told, was incomplete without it. That hardly ever happens anymore. But! Last night I watched PHFFFT for the first time since 2008, and Kim Novak says to Jack Lemmon - I believe this is an exact quotation - "Put your hot one up against my cold one and make my cold one hot." She is asking him to light her cigarette with his cigarette, the latter of which has already been lit. Now, there is quite a long passage in my cigarette lighter book about this manner of lighting cigarettes, for which manner of lighting said cigarettes there exists a shocking slang term unprintable in a family newspaper. I know this is not a family newspaper! It is sort of a family newspaper. In any case, Ms. Novak's request would have been a perfect complement to the slang term, lending the dubious weight of anecdotal evidence to my questionable conclusions. When she said it, it seemed so familiar to me that I could have sworn I wrote about it somewhere, if not, pathetically, in my cigarette lighter book, but I can't find evidence to support that insistent feeling, not even in an old email to McNeil. In conclusion, the title PHFFFT is given an exclamation point by many internet sources (an error duplicated in my original "post" on the subject), but the title card of the actual movie does not include an exclamation point, at least in the print I watched. Maybe I will devote the rest of my life to exploring the discrepancy.
Posted by Jack Pendarvis at 7:38 AM 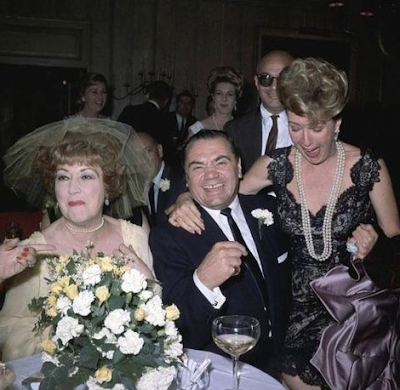 "Borgnine was so charming - a million watts." There's a sentence I never expected to read! It's from the biography of Ethel Merman, which I also never expected to read. I thought about how many watts I might assign Ernest Borgnine and settled on 250, which I thought was generous. I mean, that's more than enough watts for any task! Then Megan sent me the above photo, saying that it supported the idea that Ernest Borgnine was possessed of a certain amount of watts. Separately, I polled McNeil about how many watts he thought Ernest Borgnine had. McNeil said 11. Now, upon seeing the photo that Megan sent, I must say I was willing to go as high as 350. Bear in mind that McNeil did not have the benefit of the photo when he made his assessment.
Posted by Jack Pendarvis at 8:59 AM

Last weekend we were in Water Valley, and I noticed that the convenience store on Main Street, Rascal's by name, bills itself on its signage as "The Ultimate Convenience Store." I have to say that though I did not go in, Rascal's did not look like the ultimate convenience store. In fact, I would wager that Buddy's, across from our old apartment in Atlanta, is the ultimate convenice store. Among many other reasons, it would never have a sign on it saying "The Ultimate Convenience Store." You know what? I haven't been to Buddy's in many years. Maybe it does have a sign like that now, though I highly doubt it. Still, as Wittgenstein observed... never mind. But! As I was contemplating all this, it occurred to me that in my heart I feel like an "Atlanta person who moved to Mississippi" more than a "Mississippi person." BUT! As of August 1st of this year, we will have lived in Oxford for exactly as long as I lived in Atlanta. So on August 2nd, the math will no longer back me up, and perhaps even the feelings inside me will change. Of course, if we are going strictly by math, I will be an "Alabama person" until 2037, assuming I still live in Mississippi, or anywhere, at that time. One thing is for sure: this house will not be paid for yet.
Posted by Jack Pendarvis at 7:07 AM