Has there ever been a HAMLET in which Claudius and the ghost were played by the same actor? Wow, that would be something. It's 4:18 AM.
Posted by Jack Pendarvis at 2:18 AM 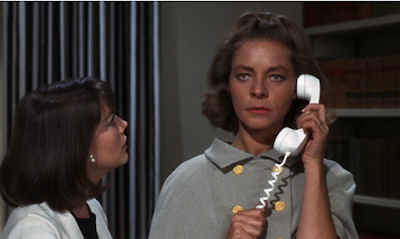 This "post" will include subject matter that some people may find morbid and upsetting! But at least what I have to say is of no interest. So, I was rewatching SEX AND THE SINGLE GIRL on McNeil's recommendation. I believe he commented on its fresh approach to... hell, I don't know. He liked the car chase. I still didn't think much of it, though this time I was taken with Lauren Bacall's unusual performance... mostly unbridled rage in a series of striking outfits. But! That's not what I wanted to talk about. This is the morbid part, and it deals with the subject of suicide. I'm sorry. It occurred to me that what SEX AND THE SINGLE GIRL, THREE ON A COUCH, and VERTIGO have in common - aside from people taking on false identities, initially for monetary gain of one kind or another - is the insincere threat of suicide by drowning as a means of kindling romantic attachment. Now, at least when Kim Novak does it, it's purely in the service of crime. There's a motivation I can understand! When Jerry Lewis does it, it's just to get some sympathy. I guess the first time Tony Curtis does it... is he still in the evil scheming stage? It's hard to remember, because he threatens suicide twice! Hmm. And whatever his motivation, the message seems to be that it's a pretty reliable and morally inconsequential way to get a gal's attention. Yes, I'm coming closer to the trouble. Kim Novak is punished (hmm, just like Tony Curtis, she "attempts" suicide first by drowning and then by flinging herself from a great height) by being accidentally (?) forced to accomplish in reality what she only pretended to attempt. Jerry Lewis and Tony Curtis, by contrast, are rewarded. Hmm! Sorry for the VERTIGO spoilers, but come on. I'm sorry for everything, really.
Posted by Jack Pendarvis at 8:52 AM

We were watching TRUE CRIME last night, and Clint Eastwood mangles his cigarette by getting it caught in his lighter, an action I have previously associated more with Jerry Lewis, as described in excruciating detail in my book CIGARETTE LIGHTER. I go on about it for pages! Very symbolic, I suggest. Boy, doesn't that sound like a great book? Anyhow, I definitely would have included Clint's bit in the book, had I taken note of it during 2014, when I was writing the damn book.
Posted by Jack Pendarvis at 9:56 AM

A memory came to me. I was sitting in an almost empty lounge at an Elvis-themed hotel mainly known, perhaps, for its onetime outbreak of Legionnaire's Disease, drinking Maker's Mark or Buffalo Trace and waiting for a catfish sandwich to arrive. When it did arrive I could tell at once - and I say this with little fear of committing libel - that it bore only the slightest familial relation to catfish, if any. Meanwhile, on the television over the bar, one of the STAR WARS prequels blared on a basic cable station, complete with commercial breaks. At the time, I had such thoughts as "Why am I here? What have I done with my life? What is the point of everything? How did I get into such a fix? Why do bad things happen to good people? Is there a different way to live? If I could do it all over again, would I? Where could I be instead of here? Am I a bad person? If there is a God, why did he allow this to happen?" Now, however, in our current circumstance - and the following observation will hardly be unique - I think back on it in every detail with tender fondness as a glimpse of heavenly glory to which I wish I could return. Also! As long as I have you here, I am in the process of blurbing a novel, which contains a character "wise as an owl," in the protagonist's words. I do not think the future existence of the book has yet been publicly acknowledged, so it is not my place to provide the details. I do stick this reminder here just for myself, like a Post-It note, so that I will not forget to add the book to my list of books with owls in them, when the time is right. Maybe those will be better days!
Posted by Jack Pendarvis at 8:26 AM 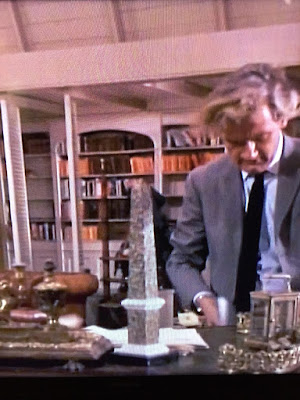 They all said McNeil was crazy! Well, me. I said it. I said McNeil was crazy when he claimed that every 1960s movie features a desk with an obelisk on it. But today I watched ONE MORE TIME, which is a 1960s movie for all practical purposes, and, as you can see from this photo I took of the television screen, it had a desk with an obelisk on it. Now, there is no Jerry Lewis scholar I trust and admire more than Chris Fujiwara, but upon the conclusion of this repeat viewing, I must say that I have come to take exception to his description of ONE MORE TIME as "lacking in humor." For example, there is an old butler who is very slow, and as the old butler slowly totters across the room with a silver platter, Sammy Davis Jr.'s moustache and sideburns turn gray, and he (Sammy Davis Jr., transformed by his interminable wait) mutters to himself in a feeble, distracted manner indicating great age. Later, in an unrelated incident, he sneezes all the icing off a cake! A second sneeze issues forth with such force that an entire roomful of people is toppled to the floor.
Posted by Jack Pendarvis at 7:17 PM 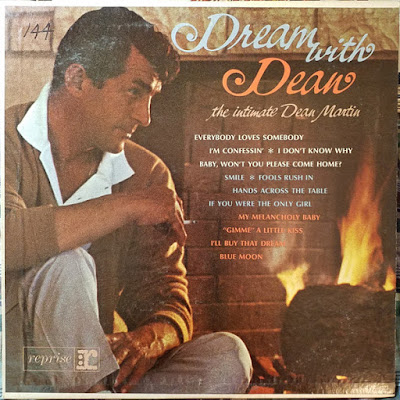 McNeil sends word of a dream he had about Dean Martin (and it's not the first time!): "The family and I were on a trip to the mountains and staying in a cabin, and Dino was there, complaining that he had to do all the fishing. He was throwing a rod and reel in the trunk complaining to me about it. And I was like, you know, I don't want to stand in a cold stream all morning. And there was a long fluorescent light bulb in the trunk and I was afraid he was going to make me eat it." Hey! As long as I have you here, I should tell you something that happened to me yesterday, though I hesitate, as the details are too crass to relate. I resorted to my GREEN'S DICTIONARY OF SLANG, for research, and, although it was not what I was seeking, I happened to find an owl in a volume where I would have never expected to find an owl: Volume 3, P-Z. The phrase in question was "shoot the owl," and I will never tell you the meaning, as it exceeds the prudish bailiwick of the "blog." In conclusion, if you keep up with all the exciting developments happening at the "blog," you are going to go crazy about this last item! Remember the obelisks that McNeil saw in the 60s beach movie DON'T MAKE WAVES? Of course you do. Well, Dr. Theresa and I have been watching the TV show AGENTS OF SHIELD, and yesterday, I had to stop everything! Stop everything! And take a photo of the TV screen (see below), because there, in the background, accompanied by the usual green reflection on our TV screen, which cannot be remedied, I detected, however fleetingly, what appeared to be THE EXACT SAME OBELISKS FROM DON'T MAKE WAVES. I'm having the evidence sent to the lab for analysis. Posted by Jack Pendarvis at 8:52 AM

I guess it was two days ago when I happened to see a TV commercial for lactose-free milk. There was a farmer standing in a field, next to a few cows, and he said (I may be paraphrasing, but only slightly) "Some folks say lactose-free milk isn't real milk. Well, then, I guess these" (indicating the cows) "must be really big dogs." The farmer said it with evident sarcasm. Was it an example of the rhetorical use of irony? I'm never sure. In any case, obviously, the cows weren't dogs, nor was the farmer sincerely claiming that the cows were dogs... but! The lingering impression bestowed on the viewer was that the milk being adverstised just might come from dogs. I am sorry to say it. But the blame lies with the advertising agency, I truly believe, and not with me.
Posted by Jack Pendarvis at 6:59 AM