The Terrors of the Night

I was trying to think of the last time I saw Lee Durkee. First we bought a house and moved away from the town square, so we're no longer walking-distance neighbors with Lee... and then a thing happened where no one can go outside anymore anyway. I guess I last saw Lee at a reading at Square Books in late February for his novel THE LAST TAXI DRIVER. That was just a couple of weeks before we knew that going to readings was deadly! But Lee and I still keep in touch through the occasional email, like the one where he told me I'd like something called THE UNFORTUNATE TRAVELLER by a sixteenth-century writer named Thomas Nashe. Lee knows what I like! So I got out this book that has THE UNFORTUNATE TRAVELLER in it, and the piece right before that is also by Nashe... something called THE TERRORS OF THE NIGHT. So, just to paint you a picture in my expert way, the last page of THE TERRORS OF THE NIGHT is facing the first page of THE UNFORTUNATE TRAVELLER. So on the last page of THE TERRORS OF THE NIGHT, Nashe talks about "those doleful quiristers of the night, the scritch-owl, the nightingale, and croaking frogs." There it was when I opened the book, right in front of my face, proving once again my theory that every great book has an owl in it, if that's what my theory is.
Posted by Jack Pendarvis at 9:48 AM

You know, we still have a television, with channels and everything, the kind of television where you sit there and flip around the channels, and last night, after Dr. Theresa had gone to bed and I was still awake, I sat there idly flipping around the channels and what do you know, here was the live-action film version of THE FLINTSTONES, and just as I arrived at it, Kyle MacLachlan was lording it over Fred Flintstone, sitting in Fred Flintstone's office chair, putting up his feet on Fred Flinstone's desk. So, Kyle MacLachlan's feet were in the foreground, a la Quentin Tarantino, and I could not help but notice that the soles and bottoms of the toes were coated in what appeared to be a fine blue dust, like Kyle MacLachlan had gotten his feet dirty walking around on the set of THE FLINTSTONES. But! Of course, it was an artistic choice! (If it really happened. My eyes are not what they used to be... maybe those were shadows on the bottoms of Kyle MacLachlan's feet!) But I think either the makeup department or Kyle MacLachlan said, you know what? A caveman would have dirt on his feet. Put a little dirt on there. Make it sort of bluish dirt. Anyway, then they cut to a new scene, which began with a closeup of Elizabeth Taylor! And I was like, that's right, in the back of my mind I knew that Elizabeth Taylor was in THE FLINTSTONES. But it still didn't seem right or possible. Elizabeth Taylor! 1994 was a strange year.
Posted by Jack Pendarvis at 6:38 AM 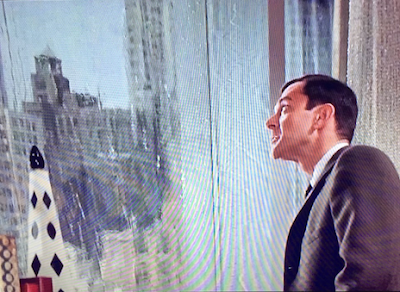 I thought I'd take this opportunity to talk about three movies, yes, three big hot up-to-the-minute entertainments that the whole world is talking about right now! 1. GHOST RIDER. Dr. Theresa and I watched GHOST RIDER. I could not help but note that the title character's famous fiery skull head set off a sprinkler system. Now, as you know, my cigarette lighter book contained a whole section about sprinkler systems being set off, and I certainly would have included this moment had I viewed it in a timely manner, if only for the novelty. 2. BOYS' NIGHT OUT. Hey! Remember when McNeil observed that every 60s movie had an obelisk in it? I was only too happy to confirm that Tony Randall stood next to an obelisk in BOYS' NIGHT OUT (see above). Furthermore, it was the SAME OBELISK that McNeil previously observed in DON'T MAKE WAVES and Dr. Theresa and I saw in AGENTS OF SHIELD, the latter of which is a TV show from present times (?), and not a 1960s movie, so I'm sorry I brought it up. 3. DEAD RECKONING. Recently, Dr. Theresa and I watched DEAD RECKONING, which takes place mainly on the Gulf Coast, the region whence I was spawned. During one scene, an attempt was made by the art department at Columbia Pictures to drape some Spanish moss artistically here and there in some tree branches, an attempt I appreciated, as it caused me to realize and exclaim, "I haven't seen Spanish moss in a long time!" And then I remembered how everyone down there loved to grab a person at every opportunity and shout in their face, "Did you know Spanish moss is related to the pineapple?" You cannot walk down a street on the Gulf Coast without someone telling you the little-known fact that Spanish moss is related to the pineapple. Why, I used to do it myself when I lived there! And I guess I am doing it now. You're not going to believe this, but Spanish moss is related to the pineapple. As I sat there during the exciting climax of DEAD RECKONING, thinking about such matters, I began to doubt myself. Spanish moss doesn't really seem to be related to the pineapple. Maybe I misheard! Maybe I misheard one hundred thousand times. So I googled for two seconds and found an article with the headline "Spanish Moss Is Related to Pineapples." That headline wasn't messing around!
Posted by Jack Pendarvis at 7:58 AM

"... better to fall from the clouds than from a third-floor window." Now, I know what you're asking yourself! "Has this 'blog' become nothing but a repository for quotations from POSTHUMOUS MEMOIRS OF BRAS CUBAS, by Joaquim Maria Machado de Assis, translated by Margaret Jull Costa and Robin Patterson?" I'm glad you asked! I don't know. Let's look at the facts. I stopped "blogging" on the day our TV blew up in 2016. Recently (not very recently), with the commencement of a worldwide health crisis, I took it upon myself to start up "blogging" again for the happiness and cheer of one and all. With the sudden and unexpected transition into the year 2021, all sorts of questions arise. I have answers for none of them.
Posted by Jack Pendarvis at 9:27 AM

Here's another quotation from POSTHUMOUS MEMOIRS OF BRAS CUBAS, by Joaquim Maria Machado de Assis, translated by Margaret Jull Costa and Robin Patterson: "There was a chicken wing on his plate, and he was dissecting it with philosophical serenity." When I read that, I thought of Kent! And how much he loves to eat chicken! And, specifically, the time he went to a restaurant and ordered a single chicken wing.
Posted by Jack Pendarvis at 7:27 AM