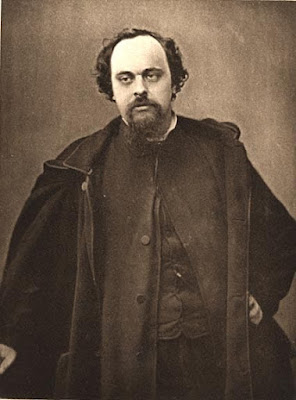 I've been sitting on this for a while. Yes, yes, checking my records, I see that on August 2 of this year, I became fascinated by wombats for a couple of hours. As a result, I "tweeted" on the subject, to which someone responded with the fact that Dante Gabriel Rossetti (pictured) kept wombats as pets. Naturally, I scurried around the "internet," seeking corroboration, which I found immediately, via a scholarly article, which quoted a poem about wombats by Mr. Rossetti. In the poem, Mr. Rossetti compares wombats favorably with owls and bats (two creatures often linked in literature, as we have seen, though seldom in the company of wombats). As you well know, I no longer "blog," although I am required by state law to maintain my famous list of books with owls in them. However! The article had no footnotes, as I recall, and now I am much too tired to check. So I have no way of knowing if the wombat poem (which appeared in a letter) was ever published, either in a book of Rossetti's poetry or in a book of his correspondence, or whether the author of the article was just rummaging around in Dante Gabriel Rossetti's things, looking for wombat information, a quest to which his life is no doubt devoted.
Posted by Jack Pendarvis at 9:18 AM

It Is Happening Again

Tom Franklin coughed up a living gnat yesterday morning. I mention it only because McNeil swallowed a gnat on April 21, 2016.
Posted by Jack Pendarvis at 9:17 AM