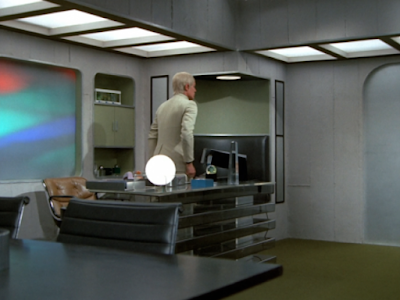 I don't "blog" anymore, but by no means did I want you to think that McNeil has stopped looking for obelisks. He sent me the above photo (seemingly from a television show called UFO) and requested a glowing orb to put on his desk. He also told me to "note the obelisk." Friends, I looked all over and didn't see the obelisk! I communicated my alarm to McNeil! I concluded - too hastily - that the thing resembling a crystal ball was the "glowing orb," not the white circle, which, as I examined it, looked so flat and artificial that I decided McNeil has placed it there through computer wizardry, in order to mark the obelisk in question. I furthermore concluded, on the basis of zero evidence, that McNeil had meant to draw a red circle (or suchlike) around the obelisk but had, instead, made an opaque white circle by mistake. Confronted with my theory, McNeil was appalled. The flat white circle was indeed the object of McNeil's admiration, a supposed "glowing orb" original to the work as televised. The obelisk, he said, was on the left front corner of the desk (from the POV of someone sitting behind it). Then I saw it! And if you look, you can see it too. Maybe you have already seen it with your fresh young eyes that are not yet old and weak like mine. In conclusion, I mentioned to McNeil that the white dot looked like something that may have been placed there by censors to cover a large hole in the seat of the man's pants. Yes, McNeil replied facetiously, that would explain the slide whistle sound effect when the man turned around. And now you know why I don't "blog" anymore.
Posted by Jack Pendarvis at 10:19 AM