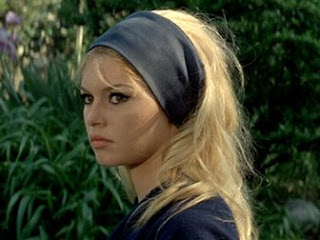 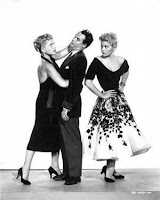 Welcome once again to one of those "posts" you shouldn't read, in this instance because a boring old "cinephile" "blogger" is going to tell you about his trouble sleeping and the movies he watched instead. You have been warned. Last night's double feature, brought to me almost at random by the dvr, was PHFFFT! (the exclamation point is theirs) followed by CONTEMPT. A profitable and instructive double feature! Watching PHFFFT! prepared me to view CONTEMPT in a whole new way. There are many similarities between the two films, aside from the big marital themes - little things like the use of books and scripts within scripts, and the particular sleaziness of the characters played by Jack Carson (in the former film) and Jack Palance (in the latter). See! I told you not to read this. And in each film, an apartment functions as an important supporting character. All I'm saying is that PHFFFT! allowed me to zero in on the extremely old-fashioned plot of CONTEMPT so that I was free to enjoy thoroughly and with fresh eyes the way Godard's cinematic language enhanced and commented on his film's own mechanics. Speaking of mechanics, I will conclude this thing that I hope you are not reading by mentioning that while PHFFFT! contains both a round bed and a motorized bed, it curiously does NOT contain a motorized round bed such as we often enjoy in the movies. And finally I will mention that Godard originally wanted to cast Kim Novak (who appears in PHFFFT!) as the female lead in CONTEMPT. This is the Most Boring Old Man in the Universe, bidding you adieu.
Posted by Jack Pendarvis at 9:22 AM