The Exciting World of Sidebars 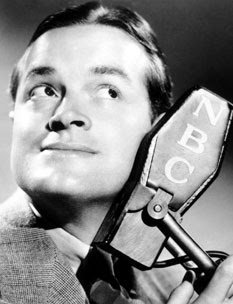 I just noticed that over on the Movie "Blog" of TCM - my favorite television channel - there's a sidebar called "Featured Sites." And this "blog" is on it! I assume this is the doing of my ex-boss Lisa, who "posts" something there from time to time. We're honored to share the sidebar with our imaginary "internet" friends "She Blogged By Night" and Tim Lucas, as well as New York Times columnist and fellow Jerry devotee Dave Kehr. If anyone from TCM actually sees this "post," allow me to nominate "Emulsion Compulson" for inclusion. Of course, if my ex-boss Lisa DOES have something to do with sidebar maintenance, she will have to overlook EC's attitude toward Bob Hope, which is a universe away from her own. (Though if I know Lisa, it will make her laugh. As I recall, she enjoyed relating the occasional scandalous legend of Bob in language not dissimilar to that employed by Mr. Marks.) By the way, a recent email from Mr. Marks explained that his take on Bob has been ineffably influenced by the real-life letters of a woman named Sally Fox, as reprinted in Harper's magazine. Ms. Fox wrote to such recipients as the FBI and the first President Bush complaining that Bob Hope was interfering with her thought patterns ... and yours!
Posted by Jack Pendarvis at 7:06 AM