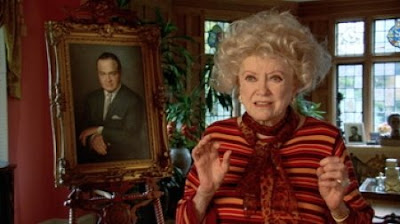 WARNING: Many of the "links" in this "post" may lead you to a discovery of saucy lingo. I recently ended up on a great, scrofulous "web" site called Emulsion Compulsion (where a theory of the "blog" was succinctly if kindly debunked). This guy "blogs" about Jerry Lewis a lot. I believe the name of his "web" site must come from the intro to Jerry's book THE TOTAL FILMMAKER, in which Jerry talks about an urge to "lick the emulsion" off the celluloid (I believe I am stating Jerry's desire correctly). Anyway, today I was noticing how much the guy from Emulsion Compulsion likes to "blog" about Bob Hope. But it seems to be a love/hate relationship. If my math is correct, it is mostly hate. In fact, it is a sort of hate/hate relationship that Emulsion Compulsion has with Bob Hope. And some of his Bob Hope reflections are filled with the foulest language imaginable! But it was on his site that I ran across this picture of Phyllis Diller in front of an imposing oil painting of Bob Hope. That reminded me: I used to know an agent in Hollywood who had been to Phyllis Diller's house. He said that she had a "shrine" to Bob Hope. He also promised to take me to the Friar's Club, but he never did. In other news of sauciness, our friend at "She Blogged By Night" says that she is tired of reining in her natural sauciness, and that she plans to let profanity spew henceforth during her discussion of olden movies. What is the world coming to? Somebody let me know, and soon!
Posted by Jack Pendarvis at 3:15 PM