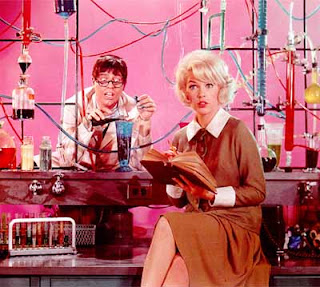 An exciting milestone for the "blog"! Tim Lucas, editor of the essential magazine VIDEO WATCHDOG and author of the definitive study of Mario Bava, has good-naturedly humored my wild claims of connection between Mario Bava's 5 DOLLS FOR AN AUGUST MOON and Jerry Lewis's CRACKING UP. He writes (Did you HEAR ME? Tim Lucas has written something we can print on the "blog"!): "I haven't seen CRACKING UP in many years, but the wax floor scene has stuck in my mind as one of Jerry's most imaginative and successful bits (though I didn't recall the M&Ms, which sounds like an excruciatingly brilliant touch and one I need to see again). If you look at my book's chapter on [the Bava film] BLACK SABBATH, you'll see that I point out the surprising similarity between the ending of the Italian version and the ending of Lewis's THE PATSY, so perhaps these two very different artists were working on a similar wavelength. Actually, I'd go so far as to say that THE NUTTY PROFESSOR is one of the few American films to use color with the same ingenuity as Bava, so they did have certain aesthetics in common. Some might go so far as to say they also both made unfunny comedies, but not me." Tim Lucas, the merciful!
Posted by Jack Pendarvis at 7:57 AM