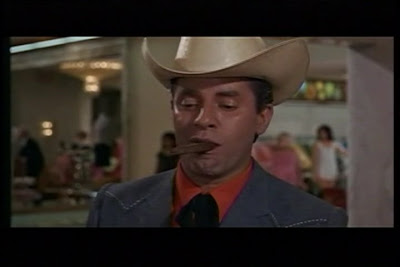 I see that fellow Jerry Lewis fan Dave Kehr, with whom I so wrongly share the sidebar on the TCM "web" site, is talking in an appropriately giddy fashion about Mr. Lewis's upcoming New York appearance over on his "blog." Even more tantalizingly, Kehr provides a "link" to the "web" site of one Chris Fujiwara, who also mentions the live appearance AND gives a fleeting hint about his upcoming book from the University of Illinois Press. The title of that book? JERRY LEWIS. Put me down for a copy! I take it as a good sign that Mr. Fujiwara cites the very scene from THE PATSY that McNeil treasures as his favorite, as well as zeroing in on my favorite character (the shy zoologist) from THREE ON A COUCH and touching on (of all things) ONE MORE TIME, a highlight of the first (and apparently last) annual McNeil's Movie Korner Film Festival, and a piece of work which McNeil and I assumed was otherwise forgotten. (Speaking of THREE ON A COUCH, Mr. Fujiwara also makes appreciative remarks (although in a more academic vein than McNeil's) about the scene that prompted McNeil's immortal question (and answer), "Are you at the part where Jerry dresses up like a cowboy? Some pretty ladies walk by and he does some classic Jerry shtick. Hilarious!" I can only hope that Mr. Fujiwara is familiar with McNeil's Theory of Potential Energy - a must for any true Jerry understanding. And finally, modesty almost forbids my suggestion that he investigate, at least for use in a valuable appendix, the fast growing field of Bava/Lewis comparative studies as pioneered here on the "blog" and bolstered by a note from actual film scholar Tim Lucas. (Pictured, "the part where Jerry dresses up like a cowboy.")
Posted by Jack Pendarvis at 12:17 PM