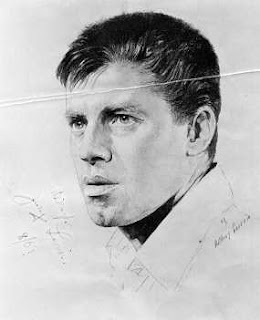 We have confirmation! Scott Marks did indeed name his "web" site "Emulsion Compulsion" in honor of Jerry Lewis. My guess was wrong, however, as to the source. It came from an interview in the University of Chicago's FOCUS magazine, reports Mr. Marks. "The quote was in reference to placing a strip of film emulsion-side-up against your upper lip," he paraphrases. Mr. Marks goes on to quote Jerry as saying, “I have an emulsion compulsion.” And now I present the final picture of Jerry from the "internet." There are no more. Goodbye forever.
Posted by Jack Pendarvis at 6:29 AM