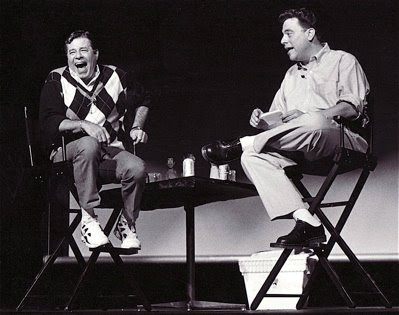 You know, Scott Marks of Emulsion Compulsion got to MEET Jerry Lewis, AND talk to him on the phone every day for a couple of weeks. He promises to write down (one day) the whole story (or at least transcribe the 3-hour live interview he did with Jerry [pictorial evidence above]). Allow me to quote a recent e-mail sent to me by Mr. Marks: "Truffaut once wrote that he'd rather watch 'Kane' than have dinner with Orson Welles. Perhaps he feared that the artist couldn't possibly live up to the art. Not so with Jerry. He was remarkable. Kind, generous and, of course, very funny." That makes the "blog" feel good. I almost "blogged" about a guy I know who found an apparently drowned lizard in his dog's water bowl and gave it (successful) mouth-to-mouth resuscitation. He's the same guy who once coached a girls' basketball team that played against the team of Sammy Davis, Jr.'s daughter. But I'm not going to "blog" about the happily revived lizard because Jerry is more important. Speaking of which, in my upcoming Neko Case article, it will be revealed to the world in legitimate printed form that I once spoke on the phone with Jerry Lewis. I manage to cram in that fact for no justifiable reason. Keep your eyes on the "blog" for more startling revelations! Some of the lizard material we're saving up is pretty good, for example.
Posted by Jack Pendarvis at 3:07 PM