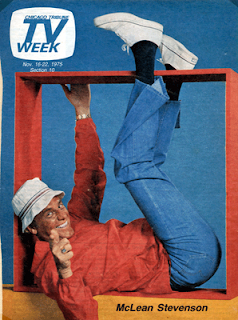 Welcome once again to "All-Star Entertainment Wrap-Up," where we keep you up-to-date with all the latest trends and happenings in the fast changing world of entertainment. THIS JUST IN: McNeil has come across an incomplete episode guide to HELLO, LARRY. "Don't ask how," advises McNeil. And remember when I said that someone should write about THE DISORDERLY ORDERLY and several other movies in a scholarly examination of medical ethics in the films of Jerry Lewis? Remember that? Well, look what I just found: a tome - yes, a tome! - of academic articles on Jerry, including one by Lucy Fischer called "Sick Jokes: Humor and Health in the Works of Jerry Lewis," which examines the relationship between THE DISORDERLY ORDERLY and Jerry's guest role as a doctor on the TV series BEN CASEY. Not exactly what "the doctor ordered" but pretty darn close. This has been "All-Star Entertainment Wrap-Up." Until we meet again, keep reaching for the "stars"! (Pictured, HELLO, LARRY's McLean Stevenson.)
Posted by Jack Pendarvis at 11:03 AM