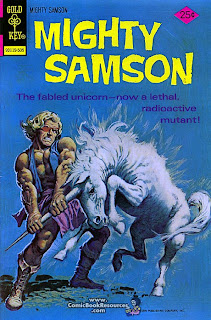 Hey, when I was adding the picture of Lee Marvin to that last "post" (which would have worked just as well as a new edition of "McNeil's Movie Korner," by the way - it has been a while since we've been blessed with one of those!) I saw something that I had almost forgotten: this unused unicorn. It came up when I was searching for the Election Day Unicorn (part of our "Holiday Unicorn Series") and was so garish and exciting that my inclination was to "post" it with the hastiest of glee. But something stopped me, and the more I looked at it, the more I thought its vibe was too negative for election day. The unicorn I used instead seemed to be knocking the crown off of some dude's head, and that felt pretty democratic to me. Still, I hate to waste a unicorn, especially one as awesome as this. In case you can't read the small, blue-on-blue copy, it says, "The fabled unicorn - now a lethal, radioactive mutant!"
Posted by Jack Pendarvis at 5:33 PM