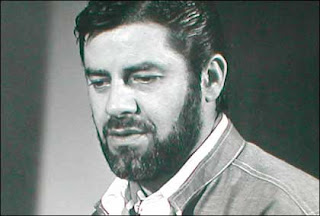 Finally! I'm once again writing "posts" with titles that sound like Robert Ludlum novels. Anyway, spurred on by Chris Fujiwara's Jerry Lewis article, I just watched THE PATSY again. Yep: it's the greatest! Received a mid-movie call from McNeil, who says that Fujiwara also wrote that book NIGHTFALL of which he (McNeil) is so enamored. In another coincidence, I figured out that in the second "post" about Jerry I ever did, there's a "link" to another Fujiwara article. Fujiwara is everywhere and we didn't even know it! McNeil says there's another fascinating Jerry Lewis coincidence afoot (non-Fujiwara, I believe) but he doesn't want to tell me yet. He's digging deeper, he says. Look! It's Jerry with a beard. That's so you won't get bored with me and turn away. It's a change of pace to keep our "blogger"/reader relationship spicy!
Posted by Jack Pendarvis at 3:42 PM