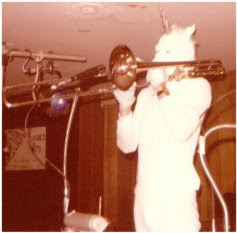 Theresa and I just finished up our annual Halloween film festival with the Hammer production THE TWO FACES OF DR. JEKYLL. This is precisely the kind of thing you don't need to read. Stop reading now! Why are you still reading? Well, this is what a "blog" is, as I have explained over and over. I can't apologize anymore. Now that that's out of the way, I can say - without in any way belittling the achievement of Jerry Lewis - that the Hammer take on Jekyll and Hyde anticipates, in a key way, THE NUTTY PROFESSOR: in both films, the Hyde character is the smooth talking, good-looking one. In an extra twist of which I think Jerry would have approved, Mrs. Jekyll does not find either version of her husband appealing. Why are you still reading this? I conclude by mentioning that my sister and her husband (still haven't come up with a good new "blog" nickname for him) were in town this weekend and we enjoyed CURSE OF THE DEMON and THE DEVIL-DOLL (that's the Lionel Barrymore horror movie, not to be confused with last year's Halloween film festival feature about a possessed ventriloquist's dummy) with them, in addition to - after their departure - 5 DOLLS FOR AN AUGUST MOON, as mentioned in the previous "post." To reward you for continuing to read (though punishment would be more appropriate), I am going to do a "Google Image Search" for HALLOWEEN UNICORN and illustrate this "post" with one of the results, as part of our popular "Holiday Unicorn Series."
Posted by Jack Pendarvis at 1:59 PM