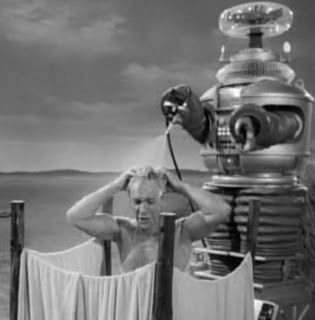 I realize that Battlestar Galactica is all over, but Theresa and I have just started watching it, thanks to evangelical prodding from the likes of Dr. "M." and Kent Osborne. As mentioned recently, there is nothing new on the "internet," ever, so I'm sure someone else has already noticed the many similarities of the Battlestar Galactica character Dr. Gaius (sp?) Baltar (sp?) to the character Dr. Smith from the TV show LOST IN SPACE. First, they are both doctors. Second, they both have affected accents. Third, they have special robot friends. Fourth, their motives are shady and sneaky. I mentioned all this to "Blog" Buddy Kimb, who promptly drew my attention to this photograph of Dr. Smith's robot friend giving him a shower - a photo which only serves to fortify my apt comparison, and you people who watched the show know just what I'm talking about. Incidentally, we saw an episode last night with a plot lifted from RED DAWN, which I am sure made Dr. "M." very happy upon its original airing. Finally, I will mention that Kimb and Kent and Mr. Ward and (I believe) Mark and I all met Jonathan Harris (who played Dr. Smith) once. But that's another story, like my secondhand knowledge of Carol Channing's all-buffalo diet and its unfortunate effects on her system.
Posted by Jack Pendarvis at 12:45 PM