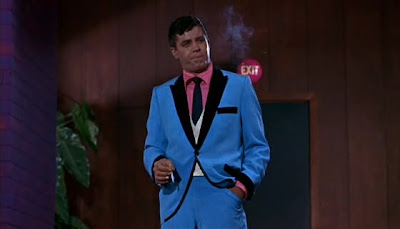 From Brian Z. comes word of a Jerry Lewis marathon - or Jerrython, as we like to call it - on TCM, March 16. The list of films (DON'T RAISE THE BRIDGE, LOWER THE RIVER - THE NUTTY PROFESSOR - THE BIG MOUTH - HOOK, LINE AND SINKER - THREE ON A COUCH) seems designed with some sinister intent - to confirm the easy doubts of doubters, perhaps, rather than to facilitate conversion. With the huge exception of THE NUTTY PROFESSOR (and I should also note that McNeil admires what little he has seen on THE BIG MOUTH on youtube, though I have distinct memories of it terrifying me as a child) these are some of the less immediately accessible Jerry titles in one way or another. (Jerry plays it too straight in DON'T RAISE THE BRIDGE; a newcomer faced with this relatively staid persona would not get the proper idea... I have defended portions of HOOK, LINE AND SINKER against McNeil's attacks, but one should heed my caveats as well... THREE ON A COUCH certainly has its admirers, especially in the comments section of Dave Kehr's "web" site, and I have pointed out its high points of comedy and design, but a novice will likely be consumed by its nihilistic black hole of a plot... etc.). This is a late-oeuvre lineup designed to titillate connoisseurs and obliterate the tender green shoots of any budding Jerry fan. So, what are we to postulate? A rogue programmer, seeking to subtly undermine Jerry for whatever nefarious reason? Take heart! Fight back! Rent THE PATSY and THE BELLBOY to prepare yourself. Then set your dvr, arm yourself with the proper equipment, get ready to mine for gold, and prove him wrong!
Posted by Jack Pendarvis at 7:27 AM