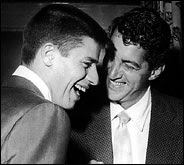 After complaining yesterday about the relative paucity of Jerry Lewis references in the New York Times as of late, especially when contrasted with the Golden Age of Jerry Lewis References a little while back, I woke to find that today's Sunday edition has obliged me with not one but TWO Jerry references - moreover, they are Dean and Jerry references. One is a passing mention in a travel section piece on Atlantic City. The other uses Dean and Jerry (by way of contrary example) to explain the congressional budgetary procedure known as "reconciliation." That's the spirit, New York Times! Spread some Jerry all over the paper. He's not just for the Arts page anymore! Over and out.
Posted by Jack Pendarvis at 9:41 AM