Did I forget to read the New York Times last Sunday? It is the only way I could have missed these thoughts on Jerry from the choreographer Sally Silvers: "Ms. Silvers approaches choreography like an artist, drawing and smudging references to ballet, sports, Isadora Duncan and even Jerry Lewis. 'He is my idea of a white man that refused to assimilate into whiteness,' she said. 'Jerry represents the awkwardness of someone unable to figure out where his weight is, how to integrate all the parts and how to move as a sensual person.'" As far as I know, it's the Times's first Jerry reference in over a month. They were accumulating at a comfortable pace for a while, and I was happy. But do you notice in the above example how they stick that "even" in there to hint they don't take Jerry quite as seriously as Ms. Silvers does? I've got your back, Jerry! 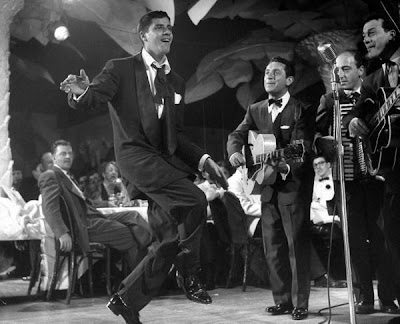 Posted by Jack Pendarvis at 5:23 AM