I Thought of Barry B. 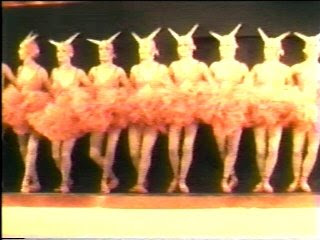 Last night I was up late watching TCM when I caught part of a short film, an early talkie in that weird, very old Technicolor (I think) that's all red and blue. The short is called "The Devil's Cabaret." It revolves around the devil's personal assistant "Howie Burns" and has some ballerinas dressed up like devils dancing around a large metallic insectile devil's head, and some flappers in skimpy costumes sliding down a long sliding board shaped like the devil's tongue and protruding from a more cartoonish devil's head. It reminded me of some other things we've mentioned on the "blog," such as the 1959 Mexican film SANTA CLAUS and Barry B.'s favorite movie THE FORBIDDEN ZONE but mostly it just reminded me of the weirdest thing I've ever seen, which it was, and I wished Barry B. was up watching it, wherever he might "B." "The Devil's Cabaret" is apparently the only thing ever not represented on youtube, but I did manage to find a couple of blurry stills. 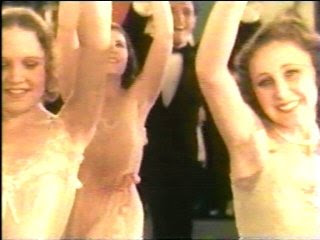 Posted by Jack Pendarvis at 9:50 AM