Phil sent me a picture of an oatmeal billboard that he feels is too "hip." I know I put a lot of things in quotation marks on the "blog," but this time I really mean them. So maybe I should say """hip.""" Phil is afraid the admen responsible may be "ruining oatmeal." I know what Phil is driving at, I believe. It is that kind of """hip""" when the Burger King had a scary plastic face that didn't move and he didn't seem to care very much for the food he was hawking. Like, "We know you kids don't dig commercials, so here's something pretending not to be one." And of course you recall the weird Cheetos commercial with the pigeons to which we have drawn your attention in the past. I think I am on Phil's side. Oatmeal is not in need of a PR overhaul! I cannot speak for Burger King and Cheetos. Finally, I believe this picture is going to come out sideways and look maybe even extra """hip""" but only because I am an old man who does not fully grasp the uses of computers. 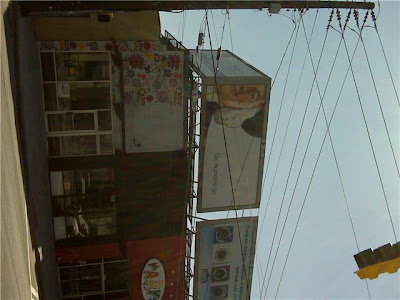