Brazil With An S 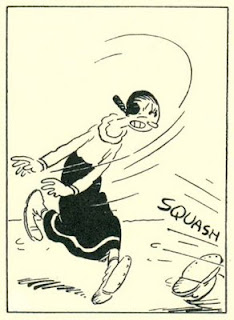 Welcome to another report from Brasil. We are pleased to hear that while Tom Franklin is there he is thinking of Jerry Lewis! "Saw him once on Mike Douglas and when Jerry put a cig in his mouth and uncapped his Zippo-esque lighter the flame that shot out was huge, like four inches of flame. It got a big laugh, esp. as he crossed his eyes to light the cig," Tom writes, before moving on to matters Brasilian. "Yesterday had a lunch beer at the Brasilian equivalent of McDonald's, a place called Habib's, which has as its cartoon mascots Popeye, Olive Oyl [pictured] and Bluto. Food is good, hamburgers, Middle Eastern food & little pizzas to die for that are .49 centavos, abt 20 cents. They have actual waiters who wait on you, even if you sit there an hour, two, reading Gentlemen of the Road [by Michael Chabon] and ordering one chopp (draft beer, pronounced sho-pee) after another. And that's the best thing abt Habib's. They serve beer!" Tom also says that GENTLEMEN OF THE ROAD is hilarious and great.
Posted by Jack Pendarvis at 8:36 AM