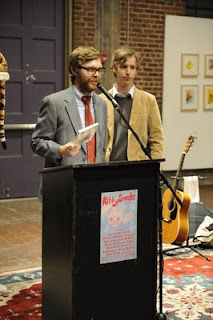 I received a message from one of the editors of Kitty Snacks. Said he: "I recently got the new Believer Film issue in the mail and there's a great DVD featuring crazy rare videos of Godard going around the USA. There's also a clip from the Dick Cavett show with Godard where he mentions Jerry Lewis. Check it out!" I am attaching a picture of the editors of Kitty Snacks so you can see how youthful and hep they are. The very idea that I have one of them writing emails about Jerry Lewis swells my heart with pride. I should also mention that I am an hour into THE BIG MOUTH (starring Jerry Lewis) and I laughed out loud when Jerry played tennis in slow motion, swinging at (and missing) several tennis balls in a row. Also, the bad guy's boat/hideout contains green carpet (with a shocking red center), orange curtains, and purple lampshades, and Jerry wears a parti-colored bathrobe in a few scenes, and the bright red L-shaped couch in his hotel room is dotted with turquoise and canary yellow pillows, all of which should make McNeil very happy.
Posted by Jack Pendarvis at 8:35 AM