I Have Been Thinking About Tom Bosley 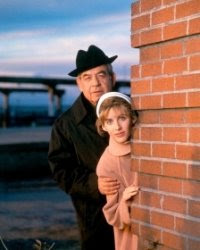 Hey, Tom Bosley used to play a priest in a detective show. He was a priest who was always getting tangled up in mysteries - with the help of a feisty nun! So that's probably why that guy got mixed up. Don't be so hard on him, Alex Trebek! Well, it is too late. I wish I had a time machine. I guess it is true that Tom Bosley does not look like a football player nor an ex-football player, hence the scorn of Mr. Trebek. I hope no "wags" will suggest that Mr. Bosley resembles a football, because he does not and let's put an end to that rumor right here and now.
Posted by Jack Pendarvis at 7:01 AM