Chicken Was My Specialty 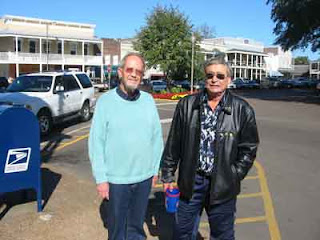 McNeil just read me a passage from the Mickey Spillane novel I, THE JURY, in which a wealthy Park Avenue socialite/psychiatrist (I think) in her luxurious penthouse feeds Mike Hammer a fancy dinner of fried chicken and french fries. This is the same passage that made Barry Hannah laugh so hard. He didn't have much use for Mickey Spillane as a writer, but that dinner made him almost love Spillane, Barry told me, "because he can't think of anything better than fried chicken and french fries." And then he laughed hard some more. McNeil likes the part where Mike Hammer's friend tells him she has "already held supper an hour waiting for you." We had a nice discussion about how you hold fried chicken and french fries for an hour. Another thing McNeil likes is the thing Mike Hammer thinks approvingly to himself upon seeing the fried chicken: "Chicken was my specialty." And these lines: "'There is an angle,' she said casually. 'Let's have it,' I said through a mouthful of chicken." Now to the good part of writing! I am reading STICK by Elmore Leonard on the recommendation of Laura Lippman. Here is some of why Elmore Leonard is so magical. I read it to McNeil in turn. Notice the sly punctuation, just for starters: "Stick didn't say anything right away. His first impression, Chucky was one of those poor miserable slobs everybody picked on when they were kids, washed his face with snow, and he'd slink off rubbing his tears and snot, to go eat some candy." Look! Here is a picture I found of Barry Hannah and Elmore Leonard standing on the sidewalk right in front of Square Books. You can't see Square Books because it's behind the photographer. Hey! I've used that mailbox.
Posted by Jack Pendarvis at 6:03 PM