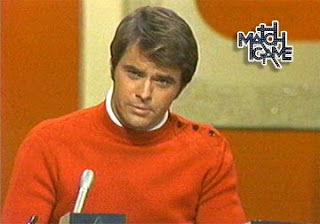 "Imagine the gallons of Johnnie Walker Red that must've fueled that 'extravaganza' from conception to next-day newspaper reviews," writes Kelly Hogan, speaking of the clip from NIGHT OF 100 STARS I so thoughtfully provided. She says it charred her retinas. Yet she watched all the way to the end - "all the way to Michael Caine's sour face," as she put it. Hogan's comments made me think a number of things. Number one, that I am going to dedicate the rest of my life to studying NIGHT OF 100 STARS. Number two, that it GETS A STANDING OVATION AT THE END. How is that possible? Number three, that it was probably all for charity or something, so I am a jerk for thinking mean thoughts. Number four, yes, Michael Caine IS making a sour face at the end, which makes me want to rank all the participants according to how much above it they thought they were. Obviously, none of them REALLY thought they were above it. And Michael Caine would do anything, as he has openly admitted. Robert Urich (pictured) sure seems to think it is beneath him, though! I am not a celebrity mind reader! But it seems that way to me. On the other end of the scale, Bob Fosse is a pro, trying to inject some style into his brief appearance. I thought Matt Dillon looked like a good sport, but Hogan compares him to Frankenstein. I can't tell whether Burgess Meredith is really into it or if there's something wrong with him. Hogan agrees: "That Rockette is lifting him right off the floor!" She concludes, "And when the credits rolled, I swear I misread them as 'emotional consideration provided by...'"
Posted by Jack Pendarvis at 2:49 PM