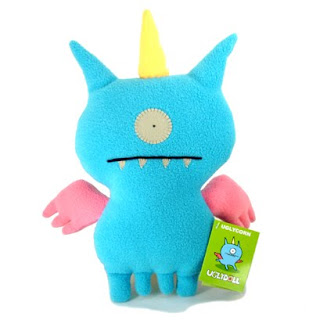 I used to read a magazine named GIANT ROBOT all the time. It is not their fault I stopped! I don't know what happened. I got old, maybe? It was a scrappy upstart (to use a phrase from last week's episode of MAD MEN) when I was reading it back in the 90s. I believe Kent introduced it to me in Los Angeles, then I started buying it at Criminal Records in Atlanta. Isn't this a great story? It keeps going! Well, now I "follow" Giant Robot on "twitter" and "like" Giant Robot on "facebook" but who knows when I am going to "read" Giant Robot again in "real life"? I should subscribe! Maybe I will. But here's the point. I see on the "internet" that the good people at Giant Robot have come up with a doll you can buy. It is called an "uglycorn." It seems to be part unicorn, part something with wings, and part cyclops. Rhea would kill me if I didn't alert her to its existence. It has been so long since I mentioned Criminal Records on the "blog" that 1) it has moved since then (I mean the actual, physical store) and 2) the "link" I had up no longer directed you to its "web" site. It went to a place where you can actually search for people's criminal records! I had to fix that. The "internet" gives only the illusion of permanence. In conclusion, please buy an uglycorn to make up for all those years I have slacked off on buying Giant Robot magazine. (Note to the government: I receive no compensation from sales of the uglycorn.) Ha ha! When I was doing a "Google Image Search" for the uglycorn, I found a "blog" "post" in which a woman is unhappy with the corn she bought at the store because it is ugly, and she wonders whether she should return it.
Posted by Jack Pendarvis at 2:37 PM