The Dog Who Solves Mysteries 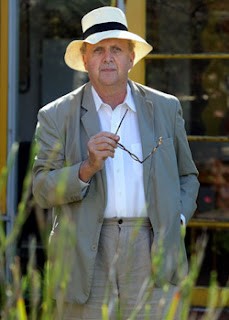 Hey, remember when my friend from Hubcap City was so upset with Christopher Buckley's author photo because Mr. Buckley was chewing on the stem of his glasses AND wearing a hat, which seemed excessive? Well, I was just reading the New York Times the modern way, on the "internet," and a huge ad kept distracting me. It was for Alexander McCall Smith, who has written a book about a dog who solves mysteries, I think, which is fine by me! It's none of my business! I think it is about a dog who solves mysteries because there is a prominently displayed dog in the ad. Also, Mr. McCall Smith is wearing a kilt (not a hat) and holding his glasses, not wearing them. Is he about to raise them to his mouth to chew on the stem? I DON'T KNOW! But it seems possible. The main thing is that the ad is one of those computer ads that jumps around. Mr. McCall Smith will suddenly give a jaunty little jerk. A few minutes later, the little dog hops up and down mechanically. I just wanted to tell you so you will not think you are crazy when it happens to you. Here (left) we see Mr. McCall Smith NOT in the photo discussed above, but wearing a hat (not a kilt) and holding his glasses, once again refusing to chew on the stem. I don't know if it is an "author photo" or just a regular photo, so he can do whatever he wants. Anyway, he loves to hold his glasses!
Posted by Jack Pendarvis at 7:41 AM