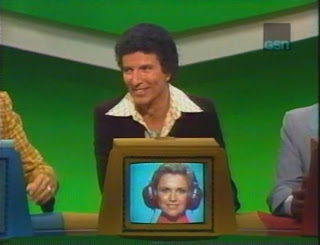 Let me be clear! When I said that "you" have never heard of the stars in the NIGHT OF 100 STARS, I did not mean to imply that I have not! I have heard of all of them, because that's what I do. I sit around and hear of stars and years later they are still in my head where they belong, these stars - long after a cold world of youths such as yourself has passed them by. Why several of the stars in the NIGHT OF 100 STARS clip I presented have been mentioned by name on this very "blog": Cab Calloway, Michael Caine, Yul Brynner, Dabney Coleman, Richard Dreyfuss, Ben Gazzara, Marvin Hamlisch, Rock Hudson, Jim Nabors, Vincent Price, and Jimmy Stewart. I mean, didn't you always want to see those guys in a long line doing Rockettes-style kicks? No? Well, what if I told you they were joined by Bert Convy (pictured), Charles Bronson, Jim Henson, Rod McKuen, Matt Dillon, Tony Randall, and David Frost? Yeah, that's right, you're paying attention now! Because brother, that's a chorus line. Man, TV used to be weird and cheap. They made a big, obvious typo on Cab Calloway's name and didn't even bother to fix it. That's the way we did things back in the 80s!
Posted by Jack Pendarvis at 7:31 AM