Elvises I Have Known 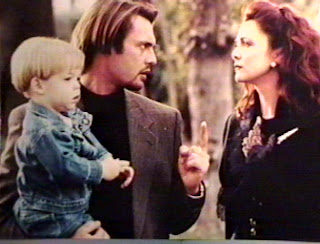 Speaking of nights of 100 things, back in August of 1994, Mr. Ward and I put together something for TBS called NIGHT OF 100 ELVISES. Yes, the name was a clever "take-off" of NIGHT OF 100 STARS. We went to Las Vegas and shot a bunch of footage at an Elvis impersonator convention and edited it to complement an evening of Elvis movies. (Note to "blog" fans [Ha ha! I know you don't exist!]: this is the same trip [first described in this "link"] during which we discovered the robot version of Foster Brooks, of which the "blog" has provided the "internet's" only pictures!) I remember standing at the top of an escalator and clapping my hands together and yelling impatiently, "Elvises! Elvises!" because they wouldn't be quiet and line up properly. Mr. Ward and I met the "Cherokee Elvis," the "Diabetic Elvis," the "Swiss/Hawaiian Gospel Elvis" and many others, including a charming and petite British woman we took to calling Elfis. The only small, passing mention I can find of our majestic effort is this article (I am sure you will "click" here) from a Baltimore paper, in which you can also find out what was happening in that night's episode of MODELS INC.! So anyway it turns out that there is an annual charity event called NIGHT OF 100 ELVISES. It's for a very good cause and has been going on since December of 1994... IN BALTIMORE! Coincidence? Do the math! In a very real way, I suppose you could say that Mr. Ward and I are the real heroes of this annual charity event I just found out about. Not really! But we named it, apparently. Maybe! Oh, and I found some more glory to steal today, involving another man named Elvis, but not Elvis Costello, with whom - as I never tire of reminding everyone (speaking of stolen glory) - I once had dinner. Wait, did I just mention that again? Silly me! I was about to tell you that there's an interview with Bill Murray in the current GQ. He says some funny and interesting things, of course. He calls film critic Elvis Mitchell the "world's smartest man." I once had the pleasure of meeting Mr. Mitchell, who stated upon that occasion that he had read and enjoyed my books. And he really had! I couldn't believe it! In fact, I assumed someone was playing a trick on me at first, putting him up to it, because I had never met anyone who had read and enjoyed my books. Here's what I am trying to say: the world's smartest man has read my books. I am going to use that in my new slogan, which will be affixed by special sticker to everything I write from now on: "Good enough for the world's smartest man... why not you?" As a special bonus, "click" here for an episode guide to MODELS INC. Pictured, a dramatic scene from MODELS INC.
Posted by Jack Pendarvis at 6:21 AM