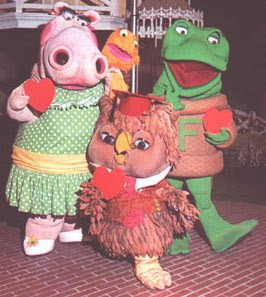 Time for everyone's least favorite thing in the world: "Literary Matters"! Usually I start off by warning you about how many horrible literary matters you will be forced to endure this time. But today's literary matters are all smashed up into one lump, which is either a good thing or a bad thing. To begin with, yes, you are right, it has been a long time since I have read any of CHRISTIANITY: THE FIRST THREE THOUSAND YEARS by Diarmaid MacCulloch. And I'm right at the Reformation, which is a big deal with lots of action! So I have no excuse. But I am "teaching" again, and for that purpose rereading the Toni Morrison novel BELOVED (which has some owls in it, once again proving my theory that all great books have owls in them), which requires a certain seriousness of attention. Who is to say that when I am able to read at pure leisure again Mr. MacCulloch will hold sufficient temptation? It would not be his fault were I to abandon him! For you see, there is the prospect of a tantalizing new book club. I can't say much until membership is nailed down - there is an apparent holdout! - and the club gives me permission to speak more. But I can give you some clues which you will never use to solve the puzzle because you don't care and even if you did care, the puzzle is too hard. All I can say is that the book is out of print, and according to its flap it is the true life story of a man who "knew plenty of mugs and could talk their language. At 25 he was... one of the few entertainers who could make Al Capone laugh. Yet Machine Gun Jack McGurn nearly succeeded in having him killed. He lost his voice... Gradually his confidence returned, his voice became audible again, and... he reached his peak as the gay, gregarious vagabond his audiences have loved ever since." That's what the 1955 book flap says! And I accidentally opened to a photograph of the St. Valentine's Day Massacre, a kind of photograph I do not enjoy, but I believe you can see how the communal pleasures of this sort of book club might lure me away from my lonely pursuit of CHRISTIANITY: THE FIRST THREE THOUSAND YEARS.
Posted by Jack Pendarvis at 6:58 PM