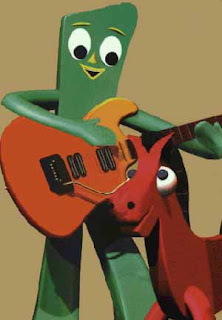 Welcome once again to Arts, Briefly, our occasional and brief look at the world of the arts. McNeil writes, "Check out this guy's page on IMDB...he hates everything but, apparently, the Best of Charlie's Angels." Thanks, McNeil. On to Art Clokey. Hey, if we had another guy named Art in today's batch it would give a whole new meaning to "Arts, Briefly." But we do not and it does not. Anyhow, I just watched a fascinating documentary about Art Clokey, the creator of Gumby. It's called GUMBY DHARMA. It is not all happy, but it will BLOW YOUR MIND, guaranteed. In it, Clokey says that CGI animation is an attempt to imitate real life, whereas stop-motion animation IS real life. It made me think of something Donald Barthelme said about how a piece of fiction should be "an object in the world rather than a commentary upon the world." Finally, when I was looking for images of Droopy Dog, I came across this (below). (Note to the uninitiated: this is not Droopy. It is his nemesis Spike, as realized by master animator Tex Avery and artfully looped by someone on youtube.) This is incredibly similar to something Barry B. used to do on our kids' show (on which, in fact, we showed Droopy cartoons) and it drove people insane. Enjoy!

Posted by Jack Pendarvis at 9:29 AM