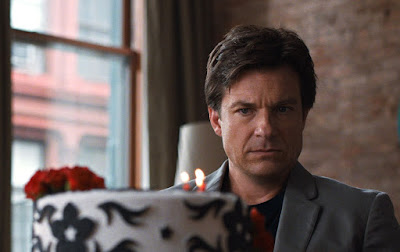 I watched perhaps the first five minutes of a Jason Bateman movie last night and now I will tell you about it. Jason Bateman worked for Dax Shepard, an awful radio personality who shouted crass things into his microphone. When Jason Bateman arrived home from work, what should he find but his crass employer in flagrante delicto with his (Jason Bateman's) wife. Now, for reasons I am embarrassed to say I did not heed, Jason Bateman is holding an entire elaborately frosted cake at this emotionally uncomfortable juncture. Recalling Chekhov's wise rule of drama I thought, boy oh boy! What is going to happen with this cake? It is certainly going to be crazy, if Chekhov has anything to say about it! Maybe I was thinking of the scene in MULHOLLAND DR. when the guy dunks all the jewels in the pink paint. Jason Bateman did not smash the cake on Dax Shepard's head. Jason Bateman stalked into the living room with the cake. Into what exquisite carpet or upholstery will Jason Bateman grind this cake? I asked myself. What delicate glassware will he destroy with this hurled cake? I wondered. Oh, I forgot to tell you, there were two lit candles on the cake. So Jason Bateman gently placed the cake on a table and sadly blew out the candles with a sad little puff of silent sadness. And I said to myself, WHAT! Not even Jerry Lewis, I said to myself, at his most... sentimental, at his most... martyred, would have dared to stage a scene of such saccharine lachrymosity and humiliation. Then I thought, who am I kidding? Of course he would've! Jerry Lewis is probably sitting at home right now saying, "Why didn't I think of that?"

Posted by Jack Pendarvis at 7:33 AM