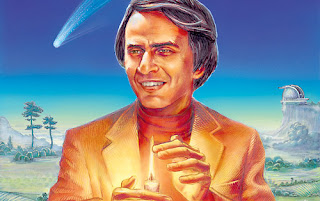 I suppose at some point I am going to have to study the 9-minute clip McNeil sent of a nice old man making a speech at a UFO banquet. The speaker is, McNeil opines, "somebody Albert Brooks would dream up. He kept repeating how he wasn't as funny as the other guys before him - but then he went ahead and told his 'feed limit' joke anyway. Hilarious." Or he's like Stanley Belt in THE PATSY, I suggested, to which McNeil responded with a hearty and affirming cheer. "And then to go and talk about aliens, and the guy he knows who talked to one..." McNeil continued. I don't know what he's talking about because I haven't made it past the first two minutes of the clip without being sad inside somehow and stopping. He (McNeil) also wants me to know that Carl Sagan (pictured) theorized that Phobos (the Martian moon upon which McNeil's beloved monolith rests) is hollow. Hollow, and (in Buzz Aldrin's words) "potato-shaped." Hollow and potato-shaped! Just like McNeil's head. Ha ha ha ha ha ha ha ha ha! Wheeeeeeeeeeee! I kid because I love. Finally, as far as I can tell, McNeil's beloved monolith has never been named. Can we get up a petition to send to NASA? Can someone name this monolith after McNeil? Who is in charge of naming monoliths? Can we just start calling it something until the name catches on? Send your solutions to "Monolith" c/o "Writer" Oxford, MS 38655.

Posted by Jack Pendarvis at 3:50 PM