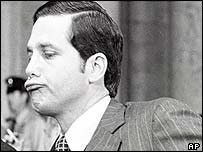 I have renounced telling you what I'm reading, but I suffer no such compunction about telling you what Jim Whorton is reading: Jeb Magruder's 1974 book AN AMERICAN LIFE. "Did you know," writes Whorton, "Bob Hope was an occasional Nixon surrogate in 1969 and the early 70s? Magruder got him to speak up for Nixon on THE TONIGHT SHOW and he helped organize 'Honor America Day' for the 1970 congressional campaign. That was the event at which Red Skelton performed an interpretative reading of the Pledge of Allegiance. But the event was marred by some hippies who held a 'smoke-in' at the Washington Monument then threw rocks and bottles at the crowd." Well! It seems as if Mr. Whorton may be attempting, subconsciously, to give us mixed emotions about Bob Hope! But remember, we should not NECESSARILY judge artists by their politics! I don't know, maybe sometimes we should! I'm too tired to figure it out right now. Besides, Bob Hope was probably a liberal compared to, say, Flannery O'Connor. By the way, it is stunning that this is the "blog's" first mention of Red Skelton, whose cameo in the Dick Powell film SUSAN SLEPT HERE is only funny if you know who Red Skelton is, but if you do, it's hysterical. (Pictured, Magruder and Skelton.)
Posted by Jack Pendarvis at 4:24 PM