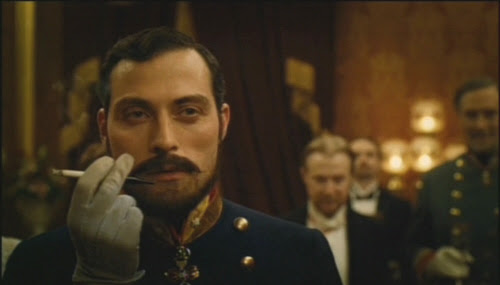 Remember when I started taking note of cigarette holders for some reason? And there seemed to be a lot of them around? And with no good justification I decided to mention it on the "blog" every time I saw a man with a cigarette holder? Well, this has become a curse! I don't care about cigarette holders anymore. I don't know why I even brought them up in the first place. Something Freudian, no doubt! An oral fixation! I suppose it could be argued that I could simply begin to ignore cigarette holders, at least to the point that I no longer keep a running tally on the "blog." But that would not be honorable! I have given my word! So I must tell you that we rented THE ILLUSIONIST tonight, and in that film, Rufus Sewell uses, yes, a cigarette holder. That's how you know the character he's playing is a jerk! There, my honor is intact. It does strike me now that there are two basic cigarette holder modes: jaunty, as in Terry-Thomas, FDR, or Hunter S. Thompson; and evil, as in characters played by Rufus Sewell, especially decadent crown princes. Mull it over!
Posted by Jack Pendarvis at 9:44 PM