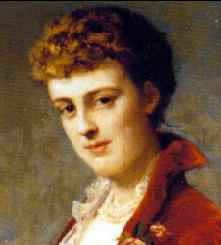 As regular readers of the "blog" will appreciate, it has been a strange week for the U.S. Postal Service. Just had a call from my friend Charles, who read to me over the phone from a letter he received yesterday, postmarked Springfield, Massachusetts. The writer, a person unknown to Charles, is by her own account an elderly woman who lives somewhere near "the Edith Wharton house," near enough, in fact, so that tourists visiting the Edith Wharton house often park in front of her (the letter writer's) mailbox. In the letter, this person requests that Charles burn down the Edith Wharton house, and offers to pay him for the service, as she is (in her words) "not without means." Charles's qualifications for such a task? Well, the letter writer seems to believe that Charles is responsible for burning down Emily Dickinson's house, for which, the letter writer assures Charles, she is "sure he had his reasons." Anyway, that's weird! (Pictured, Edith Wharton.)
Posted by Jack Pendarvis at 8:40 AM