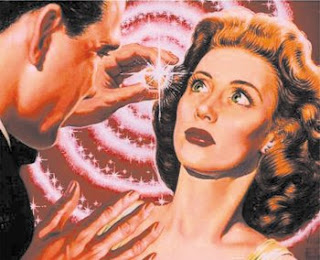 I ran across a good one today in the periodicals room: THE INTERNATIONAL JOURNAL OF CLINICAL AND EXPERIMENTAL HYPNOSIS. I tried to read an article called "Effects of Vestibular and Neck Proprioceptive Stimulation on Posture as a Function of Hypnotizability." Here's what I gathered, or sort of gathered, or may not have gathered: 1) People who can be hypnotized easily are called "highs;" people who cannot be hypnotized with such ease are called "lows." 2) It is easier to hypnotize a subject who is standing up than one who is sitting down, or it may be the other way around. The other way around seems to make more sense. Anyway, I read that paragraph five times and I can't tell you. 3) "Highs" allow their bodies to sway more freely while under hypnosis. 4) "Highs" might adapt to microgravity more easily, making them better candidates than "lows" for the astronautical profession. OKAY! There was also a great appendix at the back of the magazine, laying out a "Hypnotic Induction" translated from the French, which I now quote in part (the ellipses are original to the text): "The floating hand ... on its own ... perfectly still ... With your permission, imagine that I am covering it with a glove ... a glove that anesthetizes and that I pull on ... over the fingers ... the palm of the hand ... cool and comfortable ..." I woke up three hours later, having missed my class. Ha ha! Not really! But wouldn't that have been something? Wheeeeeee! What fun we're having now.
Posted by Jack Pendarvis at 2:23 PM