These Kids These Days 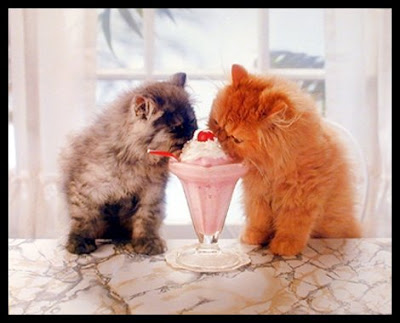 Ha ha ha! Look at these cats eating ice cream! Silly kitties! Hey, that reminds me. Some smart kids around here are putting together one of those "literary magazines" you've heard so much about. They're calling it "Kitty Snacks." These guys, unless I am mistaken, are all in Dent May's band and at least one of them works at Square Books and they just couldn't be more enterprising or nicer young men. They're putting a lot of time and energy into the magazine to make it special and just right. Well, they've asked McNeil and me to be in the first issue but despite that I think it's going to be a great magazine. So keep your eyes peeled for "Kitty Snacks." And tell 'em "Bloggy" the "Blog" Mascot sent you.
Posted by Jack Pendarvis at 4:37 AM