The Ironic Deployment of Bunting in Westerns of the 1950s 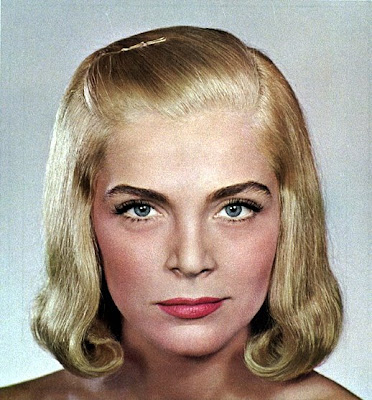 I just watched a really good, compact western called SILVER LODE. I picked it up because of an interesting passing reference in Chris Fujiwara's book JACQUES TOURNEUR: THE CINEMA OF NIGHTFALL (though it was directed by Allan Dwan, not Tourneur). After watching the film, I also seemed to recall Martin Scorsese, in a documentary, mentioning the use of bunting in SILVER LODE. Yes, that bunting is ironically deployed, no doubt about it. SILVER LODE clocks in at 80 minutes, I believe, which as you know is right in the ideal running-time range as defined by Barry B. One of the nicest surprises was discovering that Lizabeth Scott is in it. Ms. Scott was a staple of the "blog" for a long time. Lately we have neglected her. Why, we used to "post" a new picture of her every week. Of course, this was back in the olden days, when I unknowingly "stole bandwidth" to "post" pictures because I didn't even know what that meant (and still don't, by the way, but at least I know how to "post" pictures properly now). Here is a picture of Ms. Scott presented in the correct and aboveboard manner. Unfortunately, she does not play what I consider the "Lizabeth Scott role" in SILVER LODE. She plays the much tamer character I like to call the weeping bride. Someone ELSE gets to play the part that Ms. Scott would usually play: Dolly the "saloon girl" (as I suppose would be the production-code appropriate euphemism), who smokes cigarettes and makes with the wisecracks. Dolly has lines that really belong in the mouth of Lizabeth Scott as much as that cigarette, such as when the hero says, "I'm not going anywhere" and Dolly replies, "If you don't, you'll be a real dead cowboy." A little later, Dolly gets the classic, "So long, sucker," but it is a quiet and rueful line reading. The only trouble is that it's not Lizabeth Scott saying it. Nothing against the woman who did play Dolly the saloon girl. She did a fine job. A small complaint! Also, the DVD was not formatted to the correct screen aspect ratio, or whatever you call it. That's life! Sometimes you can't have everything. Sometimes you can only have two-thirds of everything. Try to enjoy it and stop being such a crybaby.
Posted by Jack Pendarvis at 8:59 PM