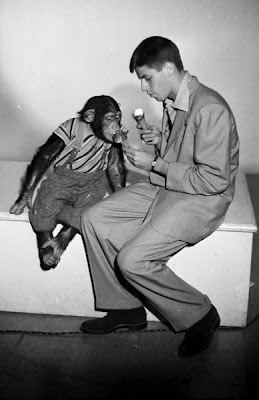 Allow me to lay on you just a few of Jerry's liner notes for his all-singing album MORE JERRY LEWIS: "There are billions of albums sold each year, and not because of the contents but because of the sexy pictures on the cover. For example, last week I bought an album because the cover was a picture of a beautiful girl in a negligee draped across a leopard skin couch. And what do you think the record in this album was? Harry Truman's acceptance speech. I don't know from nothing. I paid three bucks for the album - I danced to it anyway." Ha! Jerry!
Posted by Jack Pendarvis at 1:38 PM