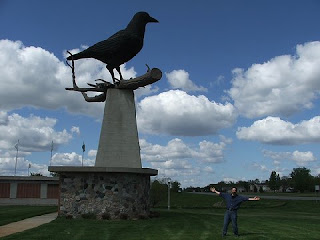 One of my undergrads turned in - as a supplement to her final paper - a couple of pages photocopied from the New York Herald of 1913. The headline pertinent to the class was "St. Louis Woman With Perfect Foot Wears a No. 2 1-2 Shoe" (don't ask) but what really got my attention was a brief, unrelated story printed in its entirety in the corner of that same page. I will type it up for you now. Please enjoy, bearing in mind that I have never learned to do "paragraph breaks" on the "blog," which accounts for any confusion you may experience: "FACES DEATH IN HANDS OF BARBER - Customer Causes the Arrest of Razor Wielder Thought To Be Insane or Affected by Drugs. - CHICAGO, Ill., Monday.- John Holm, a newspaper man, had one of the closest shaves of his life to-day. He was shaved by Perry E. Hall, a barber, who constantly discussed the ease with which he might cut Holm's throat. Holm, believing the man either insane or affected by drugs, jested with him until the shaving process was ended and then caused his arrest. 'It's a fine day,' Hall remarked as he lathered Holm. 'Yes,' answered Holm. 'And it's a fine edge I have on my razor to-day,' Hall said. He rested the razor on Holm's neck, and then remarked:- 'I could cut your throat without any trouble.' When the shave was finished Holm got a policeman. The barber will be in court to-morrow." The end. Now, do you think it's possible that the barber was making a joke and the newspaperman didn't have a sense of humor? That's it for the barber. But my student included a page from a few days later in 1913, the pertinent story being "With Tiny Feet in No. 1 AA Shoes New York Woman Defies St. Louis." Once again, my real interest lies elsewhere. The headline in the adjoining column screams "CHURCH TO TEACH HYGIENE OF SEX." But best of all is a story I wish I could read, though the bottom of the photocopy leaves off with just the headline and subhead... on second thought, maybe that's enough: ATHENS "RUBE" GIVES UP CONTEST WITH CITY WITS - Casey, Giant Farmer, Calls All Bets Off When He Is Placed on His Head and His Last Coins Are Shaken from His Pockets." The New York Herald from 1913 is my new favorite newspaper!
Posted by Jack Pendarvis at 10:36 AM