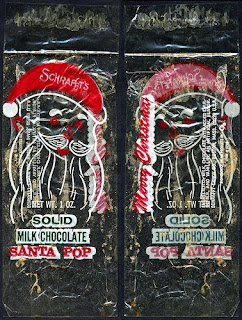 There was so much I wanted to say about our various "blog" advent calendar pages for this year, but I could say nothing, because to comment on the "blog" advent calendar is to ruin the surprise of it, and the surprise is the whole point. But now that it's all out in the open, I will try to think back on some of the fascinating elaborations I wished to make, identifying each calendar page by its assigned number like so: 6. I love that woman's name, Violet Tweedale. If you were making up a fictional character who had written a book called GHOSTS I HAVE SEEN, her name would be Violet Tweedale. 8. I went through several versions of "Mr. Sandman" before settling on this one. I will "post" the runner-up below. One thing I've noticed about youtube: if you are an amateur singer having fun, watch out! Other amateur singers, or self-appointed experts on amateur singing, love to make derogatory ("constructive") comments about you on the youtube. The innocent young ladies below were chided, "You sing this WAY TOO﻿ FAST! You take the charm out of the song." But they got off really easy compared to Sunday school children's choirs singing Christmas carols. One reason I didn't include any children's choirs this year is that you would not believe the amount of trash talk that goes on about out-of-tune children's choirs on youtube. There is hardly anything I enjoy more than a good, sincere out-of-tune Christmas carol, heartily sung, but no one on the youtube agrees with me, and their bitter commentary prevented me from "linking" to many a heartfelt outburst of slightly damaged melody, lest you think I shared the corroded outlook of youtube's jaded sentinels of pitch. 9. My favorite part of the Hawaiian Punch FAQ is "Punchy has been revamped with contemporary fashion and music to appeal to modern consumers. He still has the punch! ... The long-time spokesman for Hawaiian Punch was given a more contemporary look that appeals to teens." 11. Oh brother! What can I say? This one came from a real treasure trove. This guy's "photostream" of old wrappers is the best thing on the "internet." It was hard to choose just one for the advent calendar. Here was a runner-up: The Idaho Spud candy bar. Another close contender was the seasonally appropriate and somehow creepy Santa Pop wrapper pictured above. I also found Phil's beef jerky thanks to this same amazing archive of food packaging. Why not spend hours enjoying it? I did! 12. I've always wanted to draw your attention to the great LITTLE LULU comic books of John Stanley. But somehow I restrained myself because they appear - spoiler alert! - in the climactic scene of my "forthcoming" (?) detective novel SHUT UP, UGLY (don't most detective novels end with Little Lulu references? I think that's standard), and I didn't want to dilute the thrills you would get finding that out for yourself when you read the book. But I turned that manuscript in over a year and a half ago (I have already had to change a Heath Ledger reference to a Joaquin Phoenix reference to a Zac Efron reference), and the book was supposed to come out last August, and was even reviewed a couple of times, but my publisher has been having problems that no one will explain to me, so who knows if and when the book will ever appear? Not me! So I finally gave up and mentioned LITTLE LULU precipitously, because otherwise you might never hear of John Stanley and learn to appreciate him in the proper way. You're welcome!

Posted by Jack Pendarvis at 9:00 AM